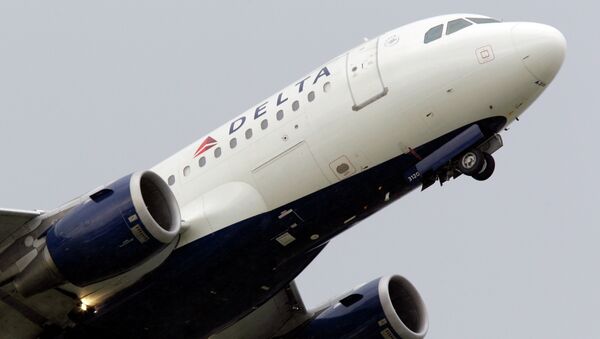 A woman wearing a headscarf aboard a Delta Airlines flight was harassed by another passenger then told to move with her family to the back of the plane.

Darlene Hider, 32, an Arab-American Muslim woman from Dearborn, Michigan, was returning from Florida on Monday with her husband and four kids when another woman yelled at her “This is America.”

When Hider informed the flight attendant fearing the situation could escalate, the crew member told her: "You are at my wit's end. You better be quiet before I kick you off of this plane! Get your kids and change seats,” according to the American Arab Anti-Discrimination Committee (ADC).

The organization obtained a video filmed by a passenger on board, showing the flight attendant yelling at Hider’s husband: “You want to get off the plane?… I'm fixing the problem… If you want, we will take you out."

In a series of tweets, ADC Legal and Policy Director Abed Ayoub, who happens to be Hider’s brother, described what happened and condemned Delta Airlines for allowing the harassment on the plane.

Hider said her main concern was being put in a situation where she couldn’t protect her family. Just spoke to my sister she said, "I felt that I couldn't defend myself or kids because, I was afraid of what more they'll do."

"We encourage Delta to take immediate steps to rectify this matter and ensure that their agents are better equipped to address instances of harassment,” said Samer Khalaf, ADC president.

The Airlines stated it will investigate the situation and will not tolerate any discrimination.

"We have been in touch with the customer. We have been reviewing the situation. Delta does not condone discrimination of any kind," Brian Kruse, a spokesman for Delta, told the Free Press Tuesday.

ADC highlights that Hider’s incident is the latest case that illustrates the ongoing problems Arab-Americans and Muslims face with flying on airplanes. Thousands are profiled and either prevented from boarding flights or harassed on them because of their faith or ethnicity.Airlines and travel industry have been harassing Arabs and Muslims for far too long.

Ayoub urges people to document incidents with video, pictures, record date and time and get names of witnesses when being harassed.