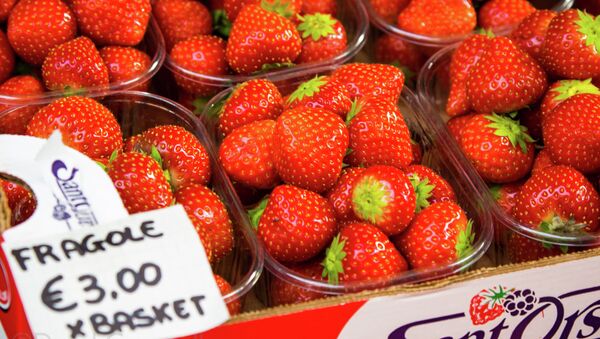 Italy to Lose Up to $5Bln From Anti-Russian Sanctions: Research
MOSCOW (Sputnik) — Italy has lost 1.25 billion euros ($1.43 billion) in exports to Russia, which have dropped by 11.6 percent since Moscow introduced a food embargo against EU member states, the head of the commercial and technical sector of Italy's farmers' association Coldiretti told Radio Sputnik.

In August 2014, Russia introduced a one-year ban on imports of many food products from the United States and the European Union. The move was made in response to economic sanctions adopted by the West against Russia over the country's alleged interference in the Ukrainian crisis. Moscow considers the accusations to be groundless.

"We have registered a 11.6-percent drop in exports compared to last year, which comprises 1.25 billion euros. This, of course, is very large and tangible damage," Lorenzo Bazzana told Radio Sputnik.

Accoprdig to Bazzana, the exports of fruit, vegetables and cheese were particularly affected in August, September and October.

Dutch, Latvian Foreign Ministers Call for More Sanctions Against Russia
Even if the sanctions did not affect some regions of Italy directly, they exacerbated conditions in the whole country, Bazzana argued.

"The EU sanctions and Russian Federation's counter-sanctions are a dead-end, they pose a big risk that the situation will only deteriorate in the future. Us farmers consider a search for greater understanding between Russia and the EU in a diplomatic way the correct approach," Bazzana said.

Brussels, Washington and a number of their allies have imposed several rounds of sanctions against Russia over the Ukrainian crisis since March 2014. The restrictions target Russia's banking, energy and defense sectors, as well as certain individuals.

Moscow has repeatedly denied being involved in Ukraine's internal affairs in any way and has responded with embargo on certain kinds of food.