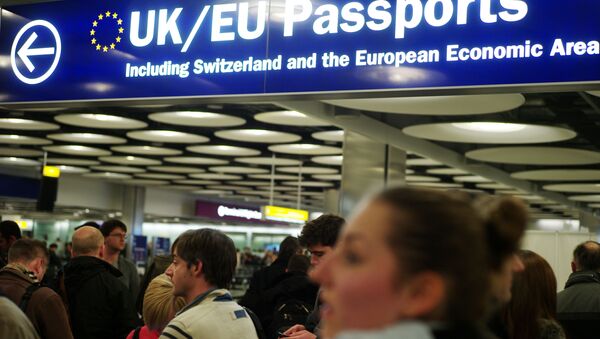 A member of the European Parliament called on the bloc to introduce new security standards for preventing terrorism. However, the proposal of mass surveillance on passengers faced considerable opposition from groups advocating civil liberties and privacy.

The committee is currently reviewing the EU Passenger Name Record (PNR) proposal, which would enable the mass collection of data about passengers flying into or out of the European Union.

"I see it [PNR] as a very important instrument for fight against terrorism. There has to be new EU rules and standards for handling the data of passengers, it has to be as soon as possible in order to prevent criminal and terrorist activities in the EU," Tomas Zdechovsky, a member of the European Parliament from the European People's Party, told Sputnik.

Data Protection day: Privacy Groups Livid amid Increasing Surveillance
The proposal of mass surveillance on passengers faced considerable opposition from groups advocating civil liberties and privacy. Moreover, there is no unity of opinions on the issue among LIBE members.

"In the LIBE Committee we have very intense debate about safeguards when it comes to fundamental rights. But how far we are going to go is a subject of negotiations…. We have to search for wide compromises," Zdechovsky noted.

According to the European Parliament member, a massive collection of passenger data is easier to implement than targeted surveillance, which has "proved to be more and more difficult since there are always new developments in terrorist activities."

New EU Anti-Terror Measures to Collect Travelers' Personal Data
However, according to Richard More O'Ferrall, spokesperson for the European Parliament's Greens/European Free Alliance group, targeted surveillance is significantly more efficient and should be conducted instead of mass surveillance, which is not actually conducive to preventing terrorism. O'Ferrall called the proposed measures "repacked political projects rather than new solutions," in an interview with the viEUws EU policy broadcaster on Tuesday.

The European Parliament started reconsidering the PNR proposal in late January after France saw a wave of terrorist attacks between January 7 and 9 that took the lives of 17 people.

Dimitris Avramopoulos, the European commissioner for migration, home affairs and citizenship, told the European parliament on January 29 that the storage of data on all air travelers under the PNR, which has been blocked by the parliament since 2013, is necessary to boost security.