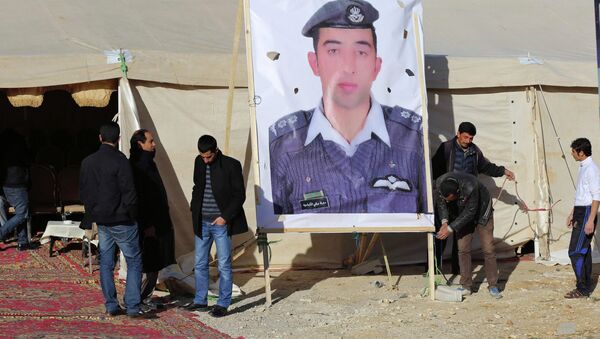 Damascus condemned the Islamic State for executing the captured Jordanian pilot and urged Amman to fight terrorists together.

Jordan Executes Two al-Qaeda Prisoners in Response to ISIL Hostage Killing
The Syrian Ministry of Foreign Affairs and Expatriates The Syrian Foreign Ministry asked Jordan "to cooperate in the fight against terrorism represented by the organization Daesh and Nusra Front… and other terrorist organizations associated with them in Syria and the region," as quoted by the television news channel. The Islamic State, a radical Sunni group that declared caliphate on large swathes of land in Iraq and Syria, is also known as Daesh.

Jordan is involved in the fight against the IS as part of a US-led international coalition. However, the United States and its allies, including Jordan, have been conducting airstrikes against the Islamic State and other extremist groups in Syria since September 2014 without formal approval from Damascus.

On Tuesday, released a video purporting to show the Jordanian pilot, captured in December, burnt alive. Earlier, the militant group, notorious for its cruelty, offered to exchange the pilot for Sajida Rishawi, sentenced to death for taking part in a suicide bombing that left 60 people killed.