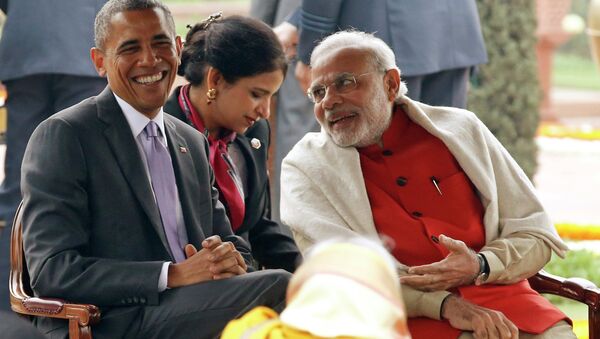 Andrew Korybko
All materials
President Obama just concluded his landmark visit to India, having been the first US President to attend the country’s Republic Day celebrations. This came on the heels of President Putin’s monumental trip there just one month earlier, making it look like the two are competing for Prime Minister Modi’s favor.

India, US Reach Breakthrough on Nuclear Deal Following Obama Visit
Both the US and Russia have major plans in the works for kick-starting India’s nuclear energy industry, and it looks like New Delhi is adroitly trying to play this to its advantage. Russia reached an agreement with India in December to construct more than 20 nuclear power plant units, while Obama proclaimed that the US and India had reached an understanding to move past their prior nuclear energy dispute and toward closer cooperation. India wants to triple its nuclear energy output within the next ten years, a forecast that could be very profitable for those who get involved. Thus, it may seem that the US’ recent understanding might have ‘one-upped’ Russia’s advantage in the nuclear field, but in reality, things are more complicated than they initially appear.

Obama’s trip to India was heavy on symbolism but light on substance, but that doesn’t mean that it wasn’t a success in some ways.

Although nowhere near rivaling the more than $100 billion worth of deals that Russia and India inked during Putin’s visit, Obama’s trip shows that the US is still a major factor in India’s strategic planning.

As Modi seeks to transform India into a global actor, he has set his sights on what he views to be pragmatic cooperation with the US in order to ‘formalize’ India’s nuclear status and perhaps reform the UN Security Council by giving New Delhi a permanent seat in the future.

Obama Hopes US Could Become India’s Closest Partner
That being considered, the emerging strategic relationship between India and the US doesn’t need immediate tangible deals to tether it in place when the long-term possibilities offer strong assurances that their bilateral cooperation will only deepen. Nonetheless, if there was a symbol that needed some substance to back it up, it was the so-called nuclear understanding that the US said it reached with India, but since it’s short on details and heavy on rhetoric, it deserves to be explored a bit more in-depth.


The Devil’s in the Details

Ever since the US and India signed their milestone nuclear cooperation agreement in 2008, the sticking point towards actually implementing it was an Indian law that held suppliers potentially liable for any accidents. American companies objected to this legislation as being a provision that could potentially bankrupt them in the event of a tragedy, while Indian lawmakers saw it as necessary to safeguard the country from any repeat of the unforgettable 1984 Bhopal industrial disaster.

Experts Say Obama's Visit to India Might Fuel Concerns of Russia, China
When Obama announced that the US and India reached an ‘understanding’ that could open the path to actual cooperation, it was that India indicated that it would also place some liability on the nuclear plant’s operators and possibly set up an insurance system supplemented by taxpayer money, thereby reaching a middle ground of sorts between its internal legislation and its American partners’ demands. Not only does New Delhi have to work out the details of this insurance scheme before American companies decide to do business there, but it also has to ratify the Convention on Supplementary Compensation for Nuclear Damage in order to assuage their fears that they won’t be held completely liable for any costly cleanup associated with any accidents.

While India has to bend over backwards to accommodate its American partners, no such demands are being dictated by the Russian side. Instead, they simply agreed to behave in full compliance with Indian legislation, showing that doing business with Russia is actually a lot easier than Western media stereotypes may lead one to believe.

So what’s behind Modi’s insistence on working with the Americans when the Russians, with their global reputation as nuclear energy leaders, could do the same job (if not better) without such legal strings attached?

One of the most important, albeit unspoken, factors guiding India’s foreign policy decisions is the anxiety that it feels about China. The East Asian giant pursued the so-called ‘String of Pearls’ strategy throughout the Indian Ocean region in the early 2000s to gain naval refueling stations and secure ports for its Mideast and African energy imports, and now it aims to implement the Maritime Silk Road to tie all of its existing and future coastal partners together in a broader economic framework.

While having announced in Beijing earlier this week that India is envisioned as having an important role in the Maritime Silk Road, New Delhi remains suspicious and feels that China is encroaching in its natural sphere of influence. On top of that, the two Indian-Chinese border disputes have heated up in recent years, with both sides accusing the other of provocative actions. Because of these developments, India sees China more as a rival than a reassuring partner.

Chinese 'Silk Road' Initiative to Diminish US Role in Eurasian Region
The US also shares the Indian viewpoint, ergo its massive Pivot to Asia, and it knows that if it can get India on board with ‘containing China’, then it makes this grand strategy much more feasible. At the same time, India understands the risks of publicly moving closer to the US (especially in the military realm), yet it still wants to keep the option open in case the perceived need arises. This explains why Obama and Modi were speaking about a strategic partnership between the two, since it doesn’t need to take an obvious, physical form in order to be effective. One would do well to be reminded that India is one of the founders of the Cold War-era ‘Non-Aligned Movement’, which in today’s global discourse, could accurately be redefined as multipolarity. India understands that Russia, given its strategic partnership with China, won’t partake in hostile or provocative actions against it, which is why it needs the US on call just in case. Also, the US can help India expand its reach into the booming ASEAN region and team up with American-ally (and Chinese rival) Japan in that theater, which could potentially help India ‘counter’ the Chinese ‘String of Pearls’ and Maritime Silk Road with its own symmetrical response.
000000
Newsfeed
0
New firstOld first
loader
LIVE
Заголовок открываемого материала
Access to the chat has been blocked for violating the rules . You will be able to participate again through:∞. If you do not agree with the blocking, please use the feedback form
The discussion is closed. You can participate in the discussion within 24 hours after the publication of the article.
To participate in the discussion
log in or register
loader
Chats
Заголовок открываемого материала
Worldwide
InternationalEnglishEnglishMundoEspañolSpanish
Europe
DeutschlandDeutschGermanFranceFrançaisFrenchΕλλάδαΕλληνικάGreekItaliaItalianoItalianČeská republikaČeštinaCzechPolskaPolskiPolishСрбиjаСрпскиSerbianLatvijaLatviešuLatvianLietuvaLietuviųLithuanianMoldovaMoldoveneascăMoldavianБеларусьБеларускiBelarusian
Transcaucasia
ԱրմենիաՀայերենArmenianАҧсныАҧсышәалаAbkhazХуссар ИрыстонИронауОssetianსაქართველოქართულიGeorgianAzərbaycanАzərbaycancaAzerbaijani
Middle East
Sputnik عربيArabicArabicTürkiyeTürkçeTurkishSputnik ایرانPersianPersianSputnik افغانستانDariDari
Central Asia
ҚазақстанҚазақ тіліKazakhКыргызстанКыргызчаKyrgyzOʻzbekistonЎзбекчаUzbekТоҷикистонТоҷикӣTajik
East & Southeast Asia
Việt NamTiếng ViệtVietnamese日本日本語Japanese中国中文Chinese
South America
BrasilPortuguêsPortuguese
NewsfeedBreaking
21:34 GMTProduction of Russia's Sputnik V in Mexico to Begin in Second Half of November - Reports
21:28 GMTTreasury to Use ‘Extraordinary Measures’ Through December 3 to Avoid Debt Ceiling
21:12 GMTTop 10% of Richest Americans Own About 90% of Stocks on US Markets - Report
21:10 GMTProject Veritas Source Says Asylum Claims to be ‘Fast-Tracked’ Without Congress Oversight
21:00 GMTChicago Chief: ‘Unvaccinated Cops Face Denied Retirement Benefits’
20:44 GMTTrump Sues House Panel Probing January 6
20:15 GMTDOJ Asks US Supreme Court to Re-suspend Texas’ Anti-Abortion Law After Lower Court Drops Ban
19:41 GMTWhite House Declines to Comment on Report China Tested Nuclear-Capable Hypersonic Missile
19:29 GMTTrump to Give Sworn Deposition in Mexican Protesters’ Lawsuit
19:23 GMTFrom 'Favourite of Presidents' to 'Test Tube Secretary': World Responds to Colin Powell's Death
19:04 GMTUK Daily COVID-19 Cases Almost 50,000 - But are Fatalities Also Rising?
18:48 GMTNATO Regrets Russia's Decision to Suspend Work of Missions
18:25 GMTIran Maintains Huge Arsenal of Missiles, Drones Despite Sanctions, Commander Says
18:25 GMTUS 'Not Pessimistic' About JCPOA Vienna Talks With Iran, But Says They Cannot Go on Indefinitely
17:24 GMTRoma Boss Jose Mourinho Blasts Juventus After Ugly Spat Erupts Between Players of Serie A Teams
17:05 GMTMeet Alexandra Hunt, a Former Stripper Who is Running For US Congress in Pennsylvania
17:04 GMTRemembrance Service for MP Amess in Westminster
16:32 GMTFBI Reportedly Helping Secure Release of 17 Missionaries Taken Hostage in Haiti
16:21 GMTUS Setting Up DHS Migration Monitoring Center to Track Illegal Aliens' Movements, Reports Say
16:19 GMTNo Room for Error: Democratic Strategists Pessimistic About Party's Prospects in 2022 Midterms