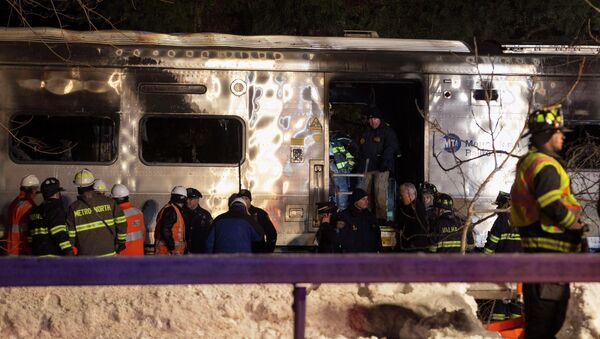 Six people have been confirmed dead in an accident involving a Metro-North commuter train and a vehicle in Valhalla, New York. Many more have been reported injured.

The train was heading northbound from New York City when it struck a Jeep at a crossing at about 6:30 p.m., pushing the car about 150 yards up the track, officials said.

The driver of the Jeep, a woman, was killed, an MTA spokesman said. The other five people killed were passengers on the train.

The Jeep was stopped on the tracks when the railroad crossing gates came down on top of it, according to an MTA spokesman. The driver got out to look at the back of the car, then got back in and drove forward when she was struck.

Hours before the crash, Peter Moreno heard on the police scanner that the railroad crossing gates about a mile south of the crash site were not working properly, the Journal News reported. Moreno tweeted the information "to let people know to be careful."

"I don't know that there's a connection," Moreno told the newspaper. "I do know that the police were dispatched earlier today for problems with the gates. I have no way of knowing if those problems were founded or if, in fact, they were connected. I find it coincidental. And it's something that bears investigation at the very least."

Numerous police and fire departments are responding to the crash, which they are calling a "mass-casualty" incident. Nearby Westchester County Medical Center, one of the only Level 1 trauma centers in the area, was preparing for patients from the crash.

The crash caused an explosion which set both the car and train on fire. The third rail also pierced the train but reportedly did not hit any passengers.

The commuter train was reportedly carrying more than 750 people. Unharmed passengers evacuated the train through the rear car and were taken to a nearby sports club, where they boarded a bus and resumed their commute.

Alex Bernier said he felt a jolt as the train came to an extremely abrupt stop.

"My first thought was that it was a signal error," he said. "There was a bit of confusion on the train. We all kind of shuffled to the back. People just started opening windows" to get out.

Service has been temporarily suspended between North White Plains and Pleasantville on the Harlem line of New York’s Metro-North commuter railroad.

Metro-North is the nation's second-busiest railroad, after the Long Island Rail Road. It has been running since 1983 and serves about 280,000 riders a day in New York and Connecticut.