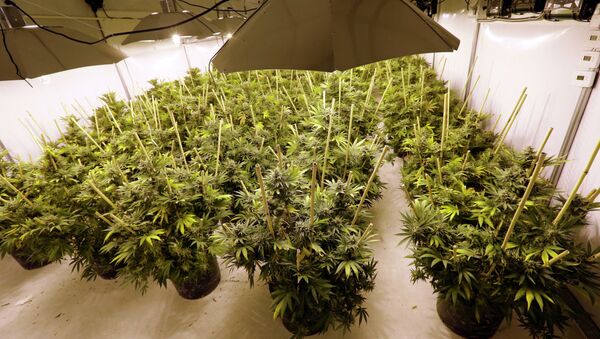 © AP Photo / Elaine Thompson
Subscribe
It looks like marijuana is definitely coming to a tribal land near you.

Ever since the US Department of Justice announced late last year that tribes could grow and sell pot on their lands, Native American tribes have been coming forward in droves to say they want in on it.

In fact, of the 568 federally recognized tribes in the United States, more than 100 have told Kansas-based FoxBarry Farms and United Cannabis of Colorado that they’re interested and look at it as another way to make some money. Both are companies that are teaming up to build the country’s first marijuana facility on tribal land, and since they aren’t the only companies in the marijuana cultivation business, it’s likely that marijuana dispensaries could soon be as common as casinos on Native American land.

The first pot dispensary on tribal land is being built on the Pinoleville Pomo Nation ranch in Mendocino County in northern California. The indoor cultivation facility is expected to cost $10 million to build, and while Pinoleville is the first California tribe to get into the marijuana business, several others in the state and across the nation are already inking deals to get going on their pot growing. The Pinoleville facility is expected to have between 50-100 employees.

Because the facilities would be on tribal lands those areas are considered sovereign nations within the United States, they are exempt from state and local ordinances that either prohibit or limit the number and locations of marijuana plants that are grown.

The federal government said that even though it considers marijuana to be illegal, it is up to the tribes themselves to decide if that’s the same case on their own lands. The tribes have to follow the same guidelines already in place for states that allow marijuana cultivation, including not selling to minors or conducting marijuana-related business on federal land. However, they would likely have to do something illegal on a large scale, as President Obama himself has said the federal government is focused on more important issues and doesn’t consider prosecuting marijuana users a top priority.

While marijuana is illegal under federal law, 23 states have legalized cannabis for medicinal purposes, and four states, along with the city of Washington, D.C., have voted to allow it for recreational use.

000000
Newsfeed
0
New firstOld first
loader
LIVE
Заголовок открываемого материала
Access to the chat has been blocked for violating the rules . You will be able to participate again through:∞. If you do not agree with the blocking, please use the feedback form
The discussion is closed. You can participate in the discussion within 24 hours after the publication of the article.
To participate in the discussion
log in or register
loader
Chats
Заголовок открываемого материала
Worldwide
InternationalEnglishEnglishMundoEspañolSpanish
Europe
DeutschlandDeutschGermanFranceFrançaisFrenchΕλλάδαΕλληνικάGreekItaliaItalianoItalianČeská republikaČeštinaCzechPolskaPolskiPolishСрбиjаСрпскиSerbianLatvijaLatviešuLatvianLietuvaLietuviųLithuanianMoldovaMoldoveneascăMoldavianБеларусьБеларускiBelarusian
Transcaucasia
ԱրմենիաՀայերենArmenianАҧсныАҧсышәалаAbkhazХуссар ИрыстонИронауОssetianსაქართველოქართულიGeorgianAzərbaycanАzərbaycancaAzerbaijani
Middle East
Sputnik عربيArabicArabicTürkiyeTürkçeTurkishSputnik ایرانPersianPersianSputnik افغانستانDariDari
Central Asia
ҚазақстанҚазақ тіліKazakhКыргызстанКыргызчаKyrgyzOʻzbekistonЎзбекчаUzbekТоҷикистонТоҷикӣTajik
East & Southeast Asia
Việt NamTiếng ViệtVietnamese日本日本語Japanese俄罗斯卫星通讯社中文（简体）Chinese (simplified)俄罗斯卫星通讯社中文（繁体）Chinese (traditional)
South America
BrasilPortuguêsPortuguese
NewsfeedBreaking
07:46 GMTR. Kelly's Negative Net Worth Grabs Attention on Twitter: 'How He's Gonna Pay the Lawyers?'
07:24 GMTMacron: Greece to Buy Rafale Jets, Three Frigates From France in Deal 'Boosting EU's Independence'
06:54 GMTHikers Find Live Nazi Grenade From World War II Near Swedish Ski Resort
06:48 GMTScania Scandal: Swedish Carmaker Investigated for Bribery Over Deal With Indian Minister
06:37 GMT25 Injured After Explosion in Residential Building in Gothenburg, Sweden, Reports Say
06:13 GMTGerman Chancellor Candidates in Focus as Tough Coalition Talks Loom
05:53 GMTBrexit to Blame: Germany's Olaf Scholz Says 'End to Freedom of Movement' Fueled UK Petrol Crisis
05:37 GMTUK Motorist Runs Over 'Knife-Wielding' Man Amid Alleged Petrol Dispute - Video
05:23 GMTPatriarchy Strikes Back? Iceland's Historic Female-Majority Parliament Up in Smoke After Recount
04:43 GMTUS Marine Colonel Put in Brig For ‘Asking for Accountability’ Over US Departure From Afghanistan
04:03 GMTWitness Who Claims She Saw Prince Andrew Dancing With Giuffre at Club to Testify in Court - Report
03:24 GMTBennett Claims He Said 'No Three Times’ to President Biden During Their August Meeting
03:16 GMTRepublicans Slam DHS Chief Mayorkas for Allowing Thousands of Haitians Into US
01:37 GMTUS ‘Humiliated Like Never Before’, Trump Says, After DHS Allowed Thousands of Migrants to Pour in
01:31 GMTLockheed Martin to Build US Army’s Next Generation Tactical Vehicle Based System
01:10 GMTBorder Patrol Agents Disgruntled Over Biden's Attempts to Throw Them 'Under the Bus' - Report
00:53 GMTBeard-Check: Afghan Barbers Banned From Shaving, Trimming Beards - Reports
00:27 GMTR. Kelly Found Guilty: Will Artist Be Removed From Music Services?
00:03 GMTIs Sir Alex Ferguson Right, That Ronaldo, and not Messi, Could Score a Hat-trick for Anyone?
00:00 GMTUS Senator Menendez Urges New Sanctions on Turkey if It Acquires More Russian Weapons