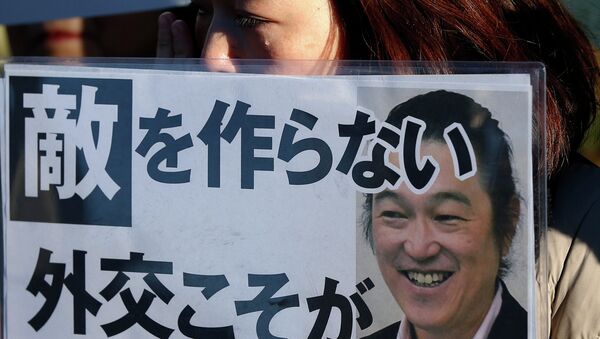 © REUTERS / Toru Hanai
Subscribe
Kenji Goto, a journalist known for covering the suffering of civilians in war zones, was a selfless person, always helping those, who didn’t have a voice, Goto's friend told Sputnik.

Kenji Goto, a respected journalist from Japan beheaded by the Islamic State, was a selfless person, who dedicated his life to helping those in need, especially children in war zones, Kenji's friend Mark Tchelistcheff told radio Sputnik. Now Kenji’s friends are determined to continue his beautiful legacy, according to Tchelistcheff.

Our hearts are heavy. We are all shocked, devastated and deeply saddened. Our prayers are with his family. #IAmKenji

"He worked very hard for people in Syria, Afghanistan and Iraq, especially the children. He was always helping those, who didn’t have a voice," Tchelistcheff said, adding that Goto’s friends are devastated, horrified and sickened by what happened. Over the weekend a video emerged purportedly showing Goto beheaded by the radical Sunni group, notorious for its cruelty.

Kenji, who went to Syria in October leaving behind a three-week old baby, was never an adrenaline junkie, according to Tchelistcheff. He "was truly a wonderful and remarkable man, who took the risk with a great measure, thinking that he could get in there and share more stories … and also save his friend" Haruna Yukawa, a private military contractor, also kidnapped by militants.

Abe’s 'Proactive Pacifism' at Stake After IS Beheads Two Japanese Nationals
The beheaded journalist was a man, who always put others before himself, according to Tchelistcheff. "Kenji always lived with the people [in war zones], ate their food, spent time with them, brought them gifts and money," he recalled, adding that many became his friends.

"Kenji’s friends in Aleppo said that parts of their souls have died with him. They were also horrified that a man, who was helping Syrians, the children of Syria, has been executed. They said that he wasn’t part of the war. All he wanted to do is help the people," Tchelistcheff said.

Tchelistcheff added that Kenji’s friends plan to set up "a foundation to continue Kenji’s beautiful legacy of helping people and to make an emergency parachute for his three children."