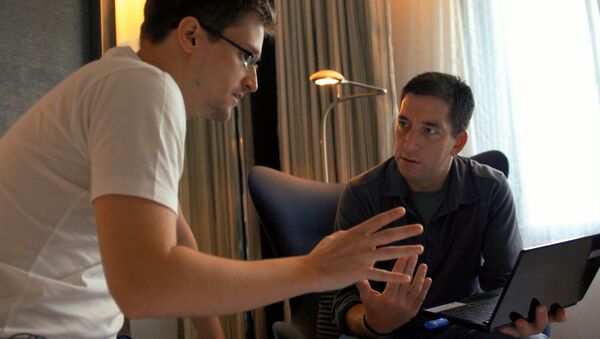 © AP Photo
Subscribe
In the nerd equivalent of getting a supermodel to take you to prom, a Toronto high school student convinced whistleblower-in-exile Edward Snowden and journalist Glenn Greenwald to address his high school’s World Affairs Conference on Monday.

WASHINGTON, February 2nd (Sputnik) — The keynote speech and moderated discussion on “Privacy vs. Security: A Discussion of Personal Privacy in the Digital Age” was the first time Snowden addressed a high school-aged audience. The group of over 1000 students heard the whistleblower and the journalist talk via livestream on topics ranging from the changes in intelligence gathering and  the importance of online privacy to whether leaking secret information is a crime or a defense of democracy.

Conor Healy, a 12th grade student at Upper Canada College, who chaired the conference and had arranged for Snowden to speak, introduced him as “perhaps the most wanted man in the whole world.”

Snowden began by explaining what he thought was the importance of the information he leaked starting in June 2013. The new spying programs, such as Prism, demonstrated  “a departure from the traditional model of intelligence gathering,” he explained.

The fact that two programs were named Bull Run and Edgehill, after Civil War battles, indicated “a battle within,” waged among the wider population, he said.

Both speakers addressed the debate over Edward Snowden as “hero or traitor.”

“I think it’s fair to say that [the leak] was responsible and very little harm has been done,” Snowden said, explaining the careful process that journalists went through to determine what parts of his leaked information to publish and what to hold back due security concerns. He added that the hero-traitor debate was “somewhat of a distraction” from the question of “how do these programs…affect us and the way we want to live.”

“Whether or not I’m Mother Teresa or Adolph Hitler has no bearing whatsoever on the content of the report.”

Healy had secured the interview with Snowden by writing a letter to him which was delivered via an ACLU lawyer. “To a certain extent I was lucky” he says of his successful request, but noted that the age of the intended audience may have been a pull for Snowden.

“He hasn’t spoken to high school students before and I think he was looking for an opportunity. But what I think came through is how much I thought the community would be fascinated by the opportunity to listen to him,” Healy told the Globe and Mail.

The age of the audience meant that the idea of a whistleblower as role model was certain to be a contentious one. A statement on Upper Canada College’s website notes they received “lively feedback, commentary and opinion” regarding the chosen speaker.

Greenwald chimed in responding to parent concerns about Snowden’s suitability as a speaker. He compared Snowden to his own childhood role model, Daniel Ellsberg, “widely regarded as a hero,” who leaked thousands of pages of secret documents about the Vietnam War to the New York Times in 1971.

“These people are strengthening democracy,” said Greenwald. In order to denounce them for having stolen the information they later leaked, “You’d have to say it would be better if we didn’t know our government was lying to us.”

Snowden has been living in Russia for almost two years, and one student also challenged him on whether he’d leak information about Russian espionage if he came across it there.

“Of course, because practice makes perfect,” he said. “Human life is about taking risks, about taking chances…it’s not enough to believe in something, you have to stand up for it.”

“They probably shouldn’t give me access to secret Russian wiretapping programs,” he concluded, to laughs from the audience.

Not all the questions Snowden fielded were heavy, however, and in response to an inquiry into his “spirit animal” he responded, “I’m an internet guy so its gotta be a cat.”

#EdwardSnowden & his spirit animal: the #cat.