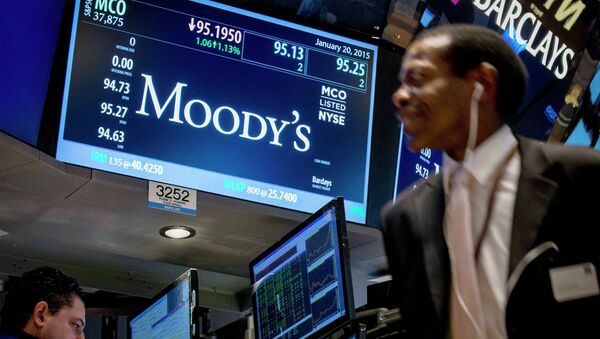 Experts say that Moody’s credit rating agency is headed down the same slippery slope towards federal litigation as its main peer, Standard & Poor’s.

WASHINGTON (Sputnik) — Moody’s credit rating agency is headed down the same slippery slope towards federal litigation as its main peer, Standard & Poor’s (S&P), which is finalizing a $1.3 billion settlement with the Justice Department for fraudulent rating of financial instruments, experts told Sputnik.

Russian, Chinese Rating Agencies to Rival S&P, Moody’s, Fitch
“Like S&P, Moody issued ratings for mortgage-backed securities which turned out to be quite a bit too high, in retrospect. Hence, I suspect Moody’s will face a similar outcome as S&P,” Professor of Finance at the University of Notre Dame Paul Schultz told Sputnik on Monday.

The Justice Department has reportedly intensified its investigation of Moody’s in recent months to determine whether the firm compromised standards to win business from banking institutions in the run up to the 2008 financial collapse, the Wall Street Journal reported on Sunday. However, none of these development are hardly shocking to many, Schultz added.

“Wall Street isn’t terribly surprised that S&P and Moody’s are being indicted,” he added. “Everybody knows what happened with the highly-rated mortgage-backed securities in 2008 and 2009 and their reputation took a hit at that point.”

According to Associate Professor of Law at George Washington University, Jeffrey Manns, the United States appears to be using the S&P approach as a “test case” to then be applied against Moody’s.

“The federal government's pending $1.37 billion settlement with Standard & Poor's has paved the way for the government to turn its attention to similar concerns about Moody's past conduct,” Manns explained.

Thomas O. Gorman, an attorney who specializes in financial fraud, came to the same conclusion regarding the parallels involved and expects the same outcome.

Moody's Own Rating Set to Drop Amid US Fraud Investigation
“I understand that the theories being considered by the Government are similar to those involved in S&P. Assuming the facts are similar, I would expect that the settlements will be comparable,” Gorman said.

The Department of Justice told Sputnik Monday it “has no comment” on the issue.

New York-based Moody's is the world's second-largest credit rating agency after Standard & Poor's. According to the US Securities and Exchange Commission (SEC), S&P had deliberately inflated grades of risky mortgage securities, and the agency was subsequently banned from grading bonds backed by commercial mortgages for one year.