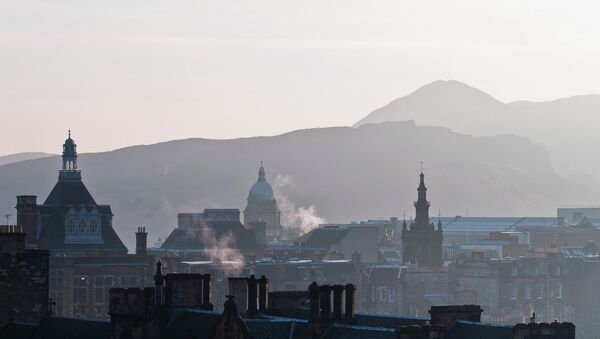 MOSCOW, (Sputnik), Anastasia Levchenko — Scared by the polls' statistics and trying to gain back the ground from the Scottish National Party (SNP), the Labour party promotes greater welfare powers for the Scottish parliament (Holyrood), distancing even from its previous premises, analysts on Scottish politics told Sputnik Monday.

On Monday, Jim Murphy, leader of the Scottish Labour Party, and former Labour prime minister Gordon Brown pledged in Edinburgh that the powers of the Scottish parliament in welfare sphere will be extended in case Labour government comes to power after the general election in May.

SSP Claims Labour Party Wrong About Scotland's Lack of Rich People
"Labour are trying to gain back some of the ground that they are clearly losing to the SNP," Craig McAngus, research fellow at the Scottish Centre on Constitutional Change, told Sputnik.

This step is presented as the continuation of a joint promise made by the leaders of the three main parties (David Cameron, Ed Miliband and Nick Clegg) just before the independence referendum on further devolution (extension of powers of the local government) in case of a No vote. The extension of powers would mean that the Scottish parliament would be allowed to top up UK benefits, such as child benefit and state pensions.

"What is interesting about Labour is that within the last two or three years especially… Labour tried to push this idea of the UK as a social union that shares the resources, as well as risks and benefits of being in a wider and a bigger country. One of the outcomes [of such union] is that people from the different parts of the country have access and right to the same social entitlements," McAngus explained. "By doing this [promoting welfare powers extension for Scotland] they are sort of saying: well, if you live in Scotland, you may well end up getting more from the state. So, it undermines the very thing that the Labour were arguing for," he continued.

Moreover, the current pledge of Brown and Murphy sounds exactly like the proposal of the Conservatives in a report on future devolution drafted in the lead-up to the independence referendum in Scotland, according to McAngus.

"I cannot logically justify any other reason why they [Labour] are doing this [going back on their ideas] other than that they are absolutely terrified by the poll rates and they feel they have to," McAngus said.

UK's Labour Party Fear Growing Popularity of SNP Ahead of General Elections
Following the independence referendum, popular support for the SNP has strengthened even further, hitting the positions of the Labour ahead of the general election. According to recent polls, SNP's popularity now stands at some 50 percent, while the popularity of the Labour is just over 20 percent.

Mark Shephard, senior lecturer in politics at the University of Strathclyde, also sees desperation in the Labour promise.

"Labour desperately needs to make inroads in Scotland to thwart the collapse of Labour seats in Scotland predicted by rise of the SNP. If this means offering more, or indeed appearing to offer more, then they will do so," Shephard told Sputnik.

The expert, however, added that the party "is likely to have to play the SNP tune", as cooperation with the SNP may be necessary for the government majority.

According to Kirstein Rummery, professor of social policy at the University of Stirling, greater welfare powers of Holyrood could bring a number of positive changes for Scotland.

"It gives Scotland the chance to redesign the welfare system to remove unfairness. It gives Scotland the power to move away from austerity-led policies favoured by Westminster. It acknowledges the maturity and power of the Scottish parliament. It could provide evidence for a change in policy in the rest of the UK — if changes are tried in Scotland, it is Scotland that bears the risk of those changes, not the whole of the UK, but if those changes work… then they can be rolled out with reduced risk in the rest of the UK," Rummery told Sputnik.

On the other side, money for additional social benefits should come from the Scottish budget, which, therefore, should be increased first.

What The Frack?: SNP to Take Stand on Fracking
"Benefits are still paid by the UK government. The Scottish parliament can [will be able to] add an extra five or ten percent, but the money for this will have to come from the Scottish budget… If you want to spend money on benefits, you have to find extra money somewhere, or you have to pay taxes," McAngus noted.

The general election in the United Kingdom will take place May 7. According to opinion polls, Conservatives and Labour are running neck-and-neck at the nationwide level. However, Labour are clearly losing ground to SNP in Scotland.