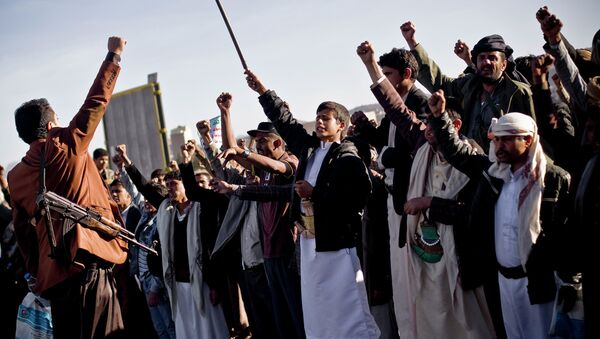 © AP Photo / Hani Mohammed
Subscribe
Organizer of the expanded National Dialogue Conference says that the three-day talks on the peaceful transition of power in Yemen that concluded Sunday were held in a positive vein.

MOSCOW, (Sputnik) — The three-day talks on the peaceful transition of power in Yemen that concluded Sunday were held in a positive vein, an organizer of the expanded National Dialogue Conference told Sputnik.

"The dialogue, held for the last three days, was quite positive and it was based on people's needs and living conditions," Mohsen Mahaqri said Monday.

Mahaqri added that the conference centred around the adoption of political reforms based on principles of justice and public interest in going forward.

According to PressTV, the group pledged to install revolutionary committees and "bring the country back to order" after the deadline passes.

The Houthis, a Shiite insurgent group, have seized parts of Yemen, including its capital Sanaa, and organized major anti-government rallies in recent months, protesting against what they believe to be widespread discrimination.

Earlier in January, Yemen’s cabinet offered its resignation amid a stand-off with the Houthi insurgents. Yemeni President Abd Rabbuh Mansur Hadi announced his resignation shortly after, stating that the situation in the country had reached a "dead end". Yemen has since faced uncertainty regarding future political control.