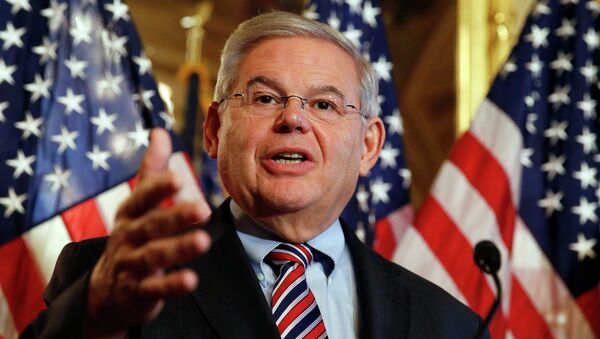 © REUTERS / Larry Downing
Subscribe
US Senator Bob Menendez claims that the US national security will be jeopardized by the Islamic State if US Republican-controlled Congress fails to pass a comprehensive Department of Homeland Security funding bill.

WASHINGTON, (Sputnik) — The US national security will be jeopardized by the Islamic State (IS) if US Republican-controlled Congress fails to pass a comprehensive Department of Homeland Security funding bill, US Senator Bob Menendez said in a press-release.

“I call on our Republican colleagues to join us in passing a clean funding bill for [US] Homeland Security…We must focus on preventing ISIS-trained terrorists from coming back from Syria to do us harm,” Menendez was quoted as saying in a press release on Monday.

US Congress to Pass ‘Clean’ Funding Bill for DHS or Face Veto, Dept. Says
The US House of Representatives introduced a $39.7 billion appropriations bill for the Department of Homeland Security (DHS) earlier in January. However, the bill included a Republican-sponsored amendment to withhold funding for any of the president’s executive actions on immigration.

“This is not the time to hit a pause button on our efforts to prevent terrorism,” Menendez said in the release.

Last week, Menendez joined other US Democrats in sending a letter to US Senate Majority Leader Mitch McConnell urging him to pass a clean DHS funding bill for the rest of the year. Currently, the department is being funded by continuing resolutions, which caps spending at 2014 levels.

DHS Secretary Jeh Johnson stressed that funding of DHS is particularly crucial and cannot be treated as “political volleyball” after the recent terrorist attacks in Paris, Ottawa and Sydney, where some terrorists are believed to be associated with the Islamic State (IS) extremist group.