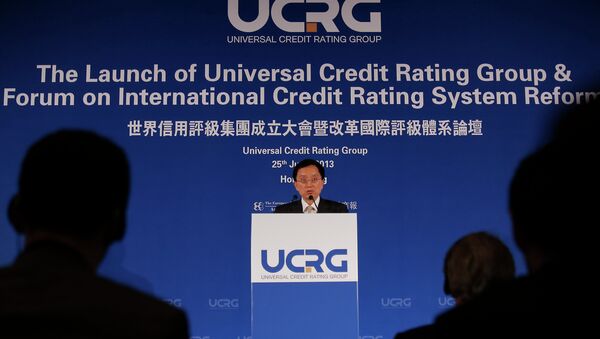 “Chinese rating agency Dagong exists for a while now. Of course, it cannot be compared with Moody’s, S&P and Fitch, which have a century-long history. However, its authority is growing. It is linked with the weakening authority of the classic rating agencies,” Nord Capital chief analyst Roman Tkachuk told Sputnik, adding that four rating agencies currently operate in Russia.

In summer 2015, rating agency Universal Credit Rating Group (UCRG), established on the basis of Dagong, Russia's RusRating and Egan Jones Rating from the United States, will begin its work.

“We feel an interest from both sides, Russian and foreign emitters. The emitters argue that the ratings should be created by the independent agency not connected with any particular state or company. This is the main difference from the big three. The UCRG will comprise almost 50 rating agencies from different countries, which will have the incorporator status,” Zaitsev told Sputnik.

UCRG will use all available calculation methods to ensure objective ratings. By the end of the year, the company will present the credit ratings of Latin American countries, BRICS countries, the European Union and the United States.