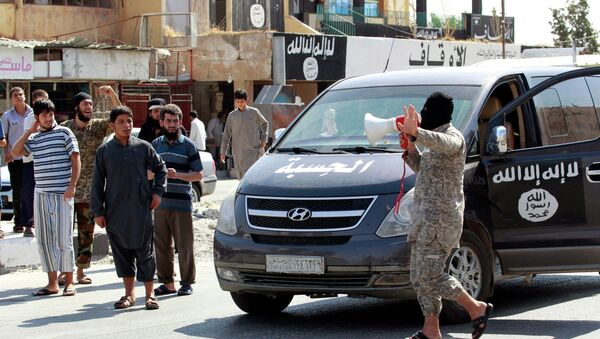 Despite their horrific actions in executing aid workers, Islamic State militants have been taking full advantage of UN Aid deliveries by repackaging them with IS logos and presenting them to the poor as if they were their own.

MOSCOW, February 2 (Sputnik) - Propaganda photos released by a Syria-based section of the militant group show what appears to be rebranded United Nations humanitarian aid being distributed to people in need.

The media-savvy group's images show UN-labeled aid boxes papered over with IS flags and labeled 'zakat', a traditional form of Islamic charity for the poor.

Daesh steals UN humanitarian aid, puts its own mark on it, and distributes it as charity. . Dawla Dawla #islamicstate pic.twitter.com/N6RNap2KVe

The boxes, which contain rice, oil and other basic supplies, are part of a UN aid effort aimed at easing the suffering of millions of Syrian refugees and internally displaced persons affected by the Syrian civil war. Among the 12.2 million people believed to be internally displaced in Syria, 40 percent are believed to be located in territories under the control of the Islamic State or the Jabhat al-Nusra. Rashid Khalikov, UN Director of the Office for the Coordination of Humanitarian Affairs, told RIA Novosti in December that "of them, 212,000 people are practically trapped as they live in the seized regions and parties to the conflict cannot agree [on] the delivery of humanitarian cargo there."

Islamic State Commands Army of 45,000 Twitter Supporters
In a December 2014 report, the UK-based think tank Overseas Development Institute, concentrating on aid delivery to areas of Iraq that are under militant control, noted that aid workers in some territories were hassled or stolen from. The report noted that in other areas, the IS allowed for the distribution of medical supplies and food, so long as it was first transferred to plain black bags without aid agency logos and transferred to IS representatives via local mediators, with no direct UN presence. Some of the aid is reported to have been branded 'IS Department of Relief'.

The ODI noted the problematic nature of negotiating aid distribution with the jihadi militants: "although duty-bound to deliver aid impartially, based on need, there is a very real fear that working with IS will inadvertently benefit the group materially, confer on it undue legitimacy in the eyes of the Iraqi people and prolong the conflict and suffering."

Kurdish Fighters Drive Islamic State Back From Oil-Rich Iraqi Kirkuk
The UN program to provide humanitarian assistance to Syria in 2015 is believed to require at least $2.9 billion this year to provide aid to the 12.2 million people inside Syria, along with $5.5 billion for refugees presently living in other countries. The UN has reported that it could not deliver aid to the over 600,000 people in Dayr Az Zawr, in eastern Syria, and Raqqah, in the country's north, since it had no agreement on aid deliveries had been made with IS and other armed groups operating in the region.