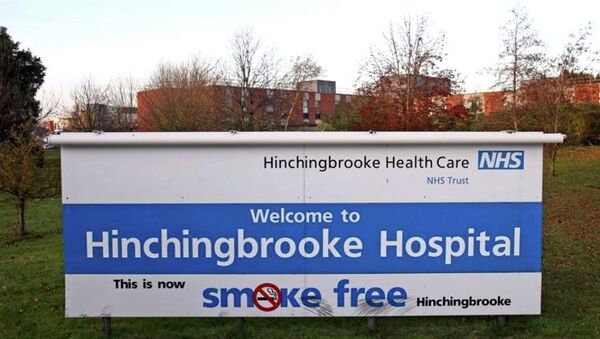 A powerful group of British members of parliament are demanding answers after the collapse of the country’s first ever privately run hospital, in a blow to both the Conservatives and Labour ahead of the general election.

LONDON, February 2 (Sputnik) — The House of Commons Public Accounts Committee of MPs has called in senior staff from the National Health Service (NHS), the Care Quality Commission and the chief executive of the private company handing back the contract to demand reasons for the collapse of the contract.

Despite cutting corners til care suffered, privatised Hinchingbrooke hospital was £7.2m in the red, we learn today @richardblogger

Britain’s NHS is set to be one of the major battlegrounds ahead of this year’s tightly-contested general election, so the collapse of a flagship privatisation contract will prove damaging for the Conservatives, whose policy favours privatisation, as well as to Labour.

The contract to run Hinchingbrooke Hospital, in Huntingdon, Cambridgeshire, was awarded to Circle Holdings in November 2010, just a few months after Conservative leader David Cameron formed his coalition government with the Liberal Democrats. Its ten-year management franchise actually began in February 2011.

Announcing the deal, health minister at the time, Simon Burns said the agreement was a “good deal for patients and staff at Hinchingbrooke” and that “there is an incentive and a pressure on Circle to seek to deliver on reducing and, we hope, eliminating over the 10 years the [trust’s £40m] historical deficit.”

On Friday 8 Jan, Circle announced that they are regretfully withdrawing from their current contract to manage Hinchingbrooke Hospital 1/2

At the time, Circle's – then – Chief Executive, Ali Parsa, hailed the privatised project a huge success. "At a time when some healthcare commentators say the solution for small district general hospitals is simply to merge or be shut down, we believe NHS Midlands and East's courage and zeal for innovation will enable us to show how clinician and staff control can provide a more sustainable alternative.” he said.

Later in 2011, however, it was reported that the terms of the deal meant Hinchingbrooke would have to deliver at least £70m of surpluses to clear those £40m debts.

Three years down the line, following a massive increase in emergency admissions and a 10.1% cut in its funding by the NHS, Circle announced in early January 2015 that operating the hospital “is no longer sustainable under current terms and that it has entered into discussions with the NHS Trust Development Authority ("TDA") with the view to ensuring an orderly withdrawal from the current contract.”

Circle’s current Chief Executive Steve Melton said: “Like most hospitals, over the past year Hinchingbrooke saw unprecedented A&E attendances and not enough care places for healthy patients awaiting discharge.  At the same time, our funding has been cut.  This combination of factors means we have now reluctantly concluded that, in its existing form, Circle's involvement in Hinchingbrooke is unsustainable”.

Dr Clive Peedell, co-leader of the National Health Action Party – who is standing against Prime Minister David Cameron in his constituency at May’s general election – told Sputnik: “They were always going to struggle and opponents of the whole deal warned that it would fall through right from the beginning. They’ve got nowhere near trying to make the efficiency-savings that were required.

Does it matter if private companies provide NHS services? Ask people who use Hinchingbrooke hospital, where the private company cut and ran

“When you want to introduce the private sector into the NHS to deliver care, you need a market system to do it. That involves contracts, massive transactions costs and research shows that it costs around £4 billion per budget, per year to deal with all the transactions costs and the market. Basically you will be losing money which could be spent on front-line care, because – by definition – you need market mechanisms within the NHS to allow private providers to enter into the system.

“The controversial Health and Social Care Act [introduced by Cameron’s government to encourage privatisation] will give money to lawyers, accountants, management consultants, instead of going on front-line care,” he said.

He said privatised firms have to make profits for their shareholders and that the only way to make savings, when the budget is restricted, is to cut back on staff. In January 2015, a report from the Care Quality Commission described Hinchingbrooke Hospital as “inadequate”.

“The way [private firms] make money is they cut back on staff and quality has suffered because what you’ll end up doing is employing less-expensive staff and less-qualified staff and you’ll end up with real problems for quality of care long-term,” said Peedell.

He said neither the Conservative party nor Labour come out of this debacle well and will face tough questions as the general election in May 2015 approaches. “Labour are criticised for opening up the system to the market [when in power before 2010]. The Conservatives gave the go-ahead for Circle to take over and have been singing its praises. That’s really scuppered their plans. It’s a huge embarrassment for the Tories.

“Both of the parties are in trouble. We have a huge £30 billion funding gap [in the NHS]. Both parties have only pledged – at the best – to plug that by about £8 billion so we’ve got a £22 billion funding-gap. The NHS just cannot continue to function at that level,” Peedell told Sputnik.

The House of Commons Public Accounts Committee is calling in senior NHS chiefs as well as Circle Holdings to demand an explanation of what went wrong at Hinchingbrooke. The answers they get may, however, prove deeply embarrassing for MPs of all sides of the house.