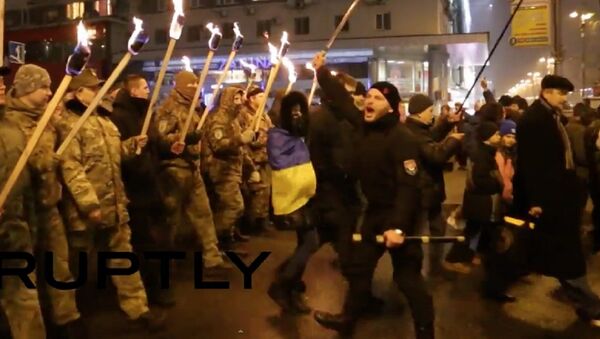 © RT
Subscribe
Several hundred young men in balaclavas marched from the country’s parliament to the Presidential Administration building on Sunday, carrying burning torches in what they claim was a show of support for the government’s military operation in the country's southeast.

Kiev Silencing Russian Media Reports on Human Rights Abuses in Ukraine
MOSCOW, February 2 (Sputnik) – Several hundred young man have staged a torch-lit rally in Kiev in what they claimed was a show of support for the government’s military operation in the country's southeast, which left thousands killed.

The crowd marched from the country’s parliament to the Presidential Administration building on Sunday, chanting slogans in which they derided the country’s Donetsk and Luhansk regions.

Fireworks, flares, and smoke bombs added up to the noise from the crowd.

The action was organized by Chesne Slovo (Honest World), an organization which sees "the promotion of the development of the Ukrainian national idea" as one of its core aims.

The escalation of hostilities in the country’s southeast since January 13 has raised the total death toll in the country to at least 5,086 (10,948 people have been wounded) between mid-April last year and January 21, 2015, according to the Office of the High Commissioner for Human Rights at the UN.

"In just nine days, between 13 and 21 January, at least 262 people were killed due to the hostilities. That is an average of at least 29 people killed per day.

This has been the most deadly period since the declaration of a ceasefire on 5 September," OHCHR spokesman Rupert Colville said at a press conference in Geneva on January 23.

"Civilians held or trapped in these areas are subject to a total lack of respect for human rights and the rule of law," he added.