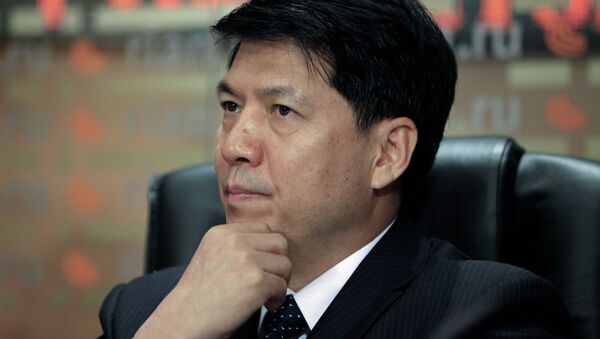 © Sputnik / Andrey Stenin
/
Go to the photo bank
Subscribe
The Chinese Ambassador to Russia Li Hui claims that cooperation between China, Russia and India complements accordance among the BRICS countries, contributing to global and regional security.

"Cooperation between China, Russia and India is an important factor that determines security and stability both in the region and in the world. This format has existed for over 10 years, in that time it has become an important platform for coordinating stances, developing consensus solutions and finding ways of cooperation," Li said.

"This format completes the BRICS mechanism and is an important instrument of active multilateral international cooperation between developing economies that increases their role in the global economic system," he added.

According to the ambassador, China, Russia and India have similar positions on a number of international and regional issues and maintain constant dialogue that increases the level of trust in their relations.

"Practical cooperation between our states contributes to real growth of the world economy. Our strategic partnership makes a contribution to the strengthening of this world and global and Eurasian stability," Li stressed.

On Monday, the foreign ministers of Russia, China and India will hold the 13th meeting in the format in Beijing. According to Li Hui, Chinese Foreign Minister Wang Yi will also hold bilateral talks with his Russian counterpart Sergei Lavrov.

Russia, China and India are the founding members of the BRICS group of emerging economies, which also includes Brazil and South Africa. Moscow and New Delhi are considering using their national currencies in bilateral trade to reduce their dependency on the dollar. In late 2014, Russia and China agreed on a national currencies swap to shore up the depreciating Rouble and said they were working to increase the number of mutual payments in rubles and yuan.