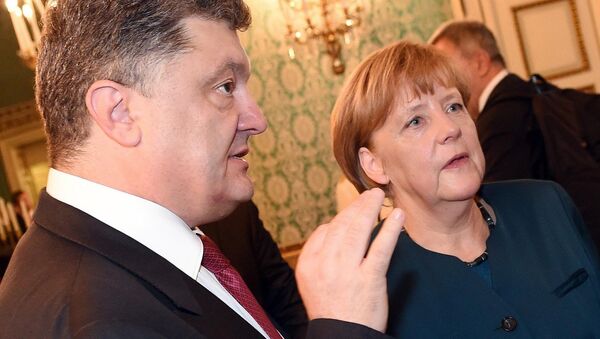 Press service of Ukrainian President said that the leaders of Ukraine, Germany and France agreed that the meetings of the Contact Group on Ukrainian reconciliation require no preliminary conditions.

MOSCOW, February 1 (Sputnik) — The leaders of Ukraine, Germany and France agreed that the meetings of the Contact Group on Ukrainian reconciliation require no preliminary conditions, the press service of Ukrainian President Petro Peroshenko said Sunday.

"It was agreed that there can be no preconditions for a meeting of the the Trilateral Contact Group [on Ukrainian crisis]," the statement published on Ukrainian president's official website said

The representatives of the self-proclaimed Donetsk and Luhansk people's republics (DPR and LPR) Denis Pushilin and Vladislav Deinego earlier said in a joint statement that the immediate ceasefire by Kiev forces is the "first and foremost condition" to continue the negotiations.

European Leaders Disappointed Over Lack of Progress in Minsk Talks
On Saturday, the Contact Group on Ukrainian crisis held a fresh round of peace talks in Minsk, the capital of Belarus.

Kiev and representatives of the breakaway republics accused each other of failing the reconciliation talks in Minsk. Kiev's negotiator Leonid Kuchma argued that the independence supporters had broken the talks down, since the leaders of Donetsk and Luhansk did not show up. In response, Pushilin and Deinego noted that Kuchma was not even officially appointed as a Ukrainian representative at the talks.

Despite the ceasefire agreement Kiev and independence supporters managed to reach during previous Minsk talks in September 2014, the confrontation between the warring parties intensified severely in the beginning of 2015, deemed by the United Nations the "worst hostilities" since the truce was signed.