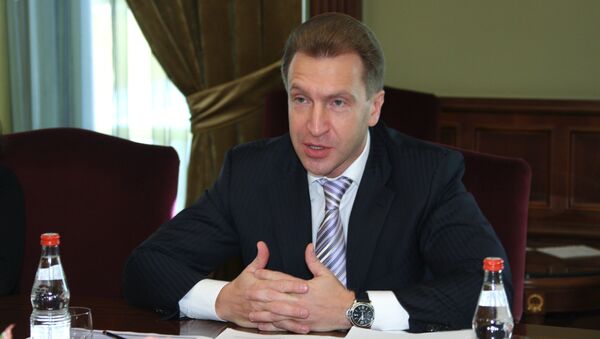 “Of course, this decision should have been made earlier, perhaps using in devaluation period of 2009. But then we would have gone through a sharp exchange rate fluctuations… doing this was quite dangerous. This is an element of structural reforms, ensuring the ruble’s freedom without special inflows from the [Central] Bank of Russia,” Igor Shuvalov said in an interview with the Rossiya 1 television channel.

People must now get used to the fact that the ruble exchange rate will not be as stable as it used to be, Shuvalov said. "The ruble will be gaining and losing, and this is a normal process."

The Russian national currency has plummeted alongside the oil prices, losing about half its value against the US dollar since mid-2014.

The decision on the volume of anti-crisis measures' financing will be made by Russian Prime Minister Dmitry Medvedev on Monday, Deputy Prime Minister Igor Shuvalov said.

"The decision will be made by Dmitry Medvedev on Monday… We will hold a special meeting, the draft is submitted to the government and the final decision on the volume of these measures' funding will be made on Monday," Shuvalov said during on Rossiya-1 television channel.

On January 21, Shuvalov said the Russian government needed some $21 billion for anti-crisis measures, with part of the funds to be taken from the National Welfare Fund.

Igor Shuvalov added that he hoped Russia would not be disconnected from the international SWIFT payment system.

"I hope it will not happen, these are the actions not connected to reasonable response to the conflict [between Russia and the West]. Moreover, we still cannot be forced to do which our western partners want us to do. Even if there is no SWIFT, we will be insisting more stubbornly that we are right. It is impossible to make us do something with force and pressure," Shuvalov said on Rossiya-1 television channel.

Earlier this week, Russian Prime Minister Dmitry Medvedev stated that if the country is restricted in using the system, the response will be "unlimited."

People must get used to the fact that the ruble exchange rate will not be as stable as it used to be, Russian Deputy Prime Minister said.

“We will see a period of ruble strengthening, and we must now get used to the fact that there will not be a stable exchange rate like the one we were used to. The ruble will be gain and it will lose, and this is a normal process,” Shuvalov said in an interview with the Rossiya-1 television channel.