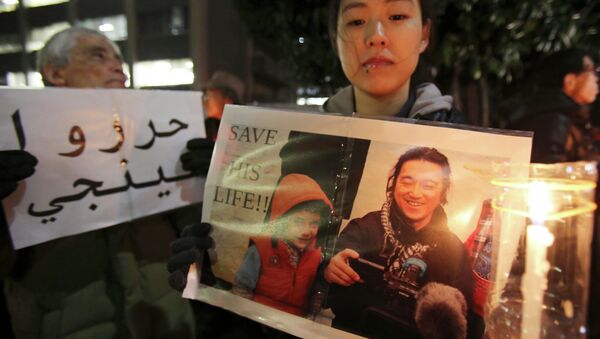 The killing of two Japanese nationals by the Islamic State (IS) terrorist group could cause the amendments to the Japanese constitution which bans offensive military action.

World in Shock Over IS Purported Beheading of Japan Hostage
MOSCOW, February 1 (Sputnik) — The killing of two Japanese nationals by the Islamic State (IS) terrorist group has raised a debate whether Japan's Prime Minister Shinzo Abe should make amends to the country's post-World War II constitutional ban on offensive military action.

The incidents were met by strong public aversion in Japan, raising debate on whether IS hostilities might become a catalyst for Abe to reform the strictly defensive nature of the military, under Article 9 of the country’s constitution.

“No doubt the government will argue that this is all the more reason why Japan needs to rid of its constitutional ban on military and take on a fuller role in the ‘war on terror’,” political science professor at the Sophia University in Tokyo, Koichi Nakano, was quoted as saying by The Guardian on Sunday.

Japan Strengthens Security Measures Amid Islamic State Extremist Threat
A professor of Japanese studies at the University of Auckland, Mark Mullins, told The Guardian that the public revulsion to the beheadings would “strengthen Abe’s resolve to push ahead with his reinterpretation of article 9 and plans to extend the military capabilities of the self-defence forces overseas.”

But according to Craig Martin, a professor at US Washburn University, Abe's government is in a rather difficult position, as military action would mean a lot of legal amendments, while deploying forces bypassing the laws would run into massive opposition.

"The vast majority of the Japanese are still reluctant to amend article 9," Martin said, as quoted by the International Business Times on Saturday.

In mid-2014, a resolution permitting Japan to take military action if threatened was passed, but the prime minister reiterated that Tokyo would not “change the principle that we cannot send troops overseas.”

Japan’s Prime Minister Condemns Apparent Execution of Journalist by IS
During his visit to the Middle East in late January, Abe announced a pledge of $200 million in humanitarian aid, mainly for the Syrian refugees, and made it clear that Japan’s contribution toward the fight against IS was purely humanitarian.

A few days later, IS issued a video, threatening to kill Japanese nationals Kenji Goto and Haruna Yukawa unless Tokyo paid a $200-million ransom. After the 72-hour deadline expired, the group released footage showing what appeared to be the dead body of Yukawa and demanded Jordan to release Iraqi woman Sajida Rishawi, on death row for taking part in a suicide attack which she survived.

In the latest video purporting Goto’s beheading, an IS militant said the group still considered the humanitarian contribution as an act of war, adding “let the nightmare for Japan begin.”

IS, a Sunni fundamentalist group, began fighting the Syrian government in 2012, later expanding its operations to Iraq, and declaring a caliphate over the territories it controlled in both countries in mid-2014.

The extremists have beheaded several foreign journalists and aid workers, as well as other prisoners.