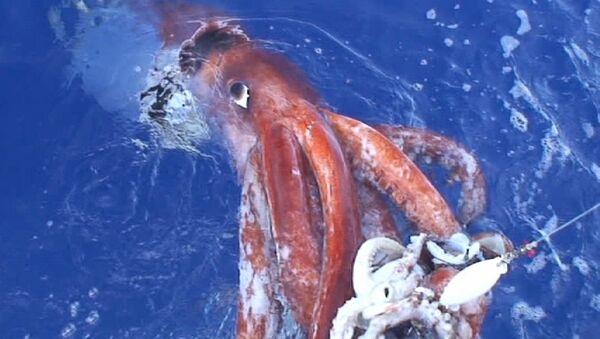 Until relatively recently, giant squids were the stuff of legends, but now that these legends have been proven true, researchers around the world have attempted to film and photograph the creatures; a German couple has decided to join the deep sea hunt in a submersible of their own design.

MOSCOW, February 1 (Sputnik) – An elderly German couple, Kirsten and Joachim Jakobsen, have begun their search for the mysterious giant squid, according to a Spiegel online report.

The hunt is set to last for three years; their aim is to seek out and film the legendary giant squid (Architeuthis) in its natural habitat.

For this purpose, the couple has developed a submersible with a large viewing dome made of Plexiglas, manufactured by Evonik Industries, the German specialty chemicals group.

The submersible, "Lula1000”, has been approved by the classification society Germanischer Lloyd SE. Lula1000 is a 7.5-meter-long submarine capable of diving to a depth of 1,000 meters.

"We are pleased to be supporting a project that further explores the largely unknown deep sea. The search of Lula1000 for the Architeuthis will provide us with completely new insights into the fascinating biosphere at these major depths," Klaus Engel, the CEO of Evonik, stated on the official website of the company.

Giant squids remain among the most mysterious sea creatures. Until the second half of the 19th century, alleged sightings of the creatures were laughed off as fish stories.

However, the legends proved to be true when the remnants of dead giant squids were discovered. The animals have eight arms and two tentacles directly attached to their head, males can reach a length of ten meters, while females can be up to thirteen meters long.

There are claims of specimens measuring 20 meters or more, but these have not been scientifically documented. 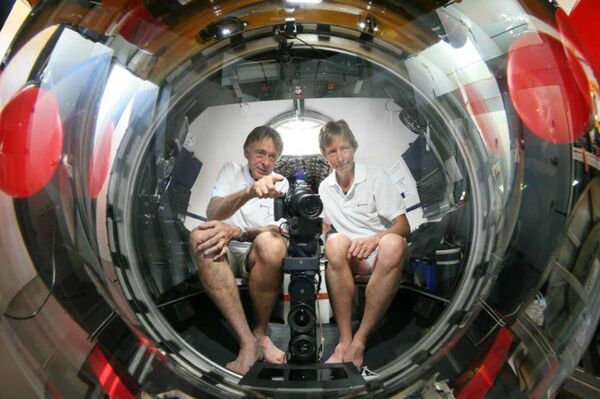 Joachim Jakobsen, who controls the Lula1000, and his wife Kirsten Jakobsen, who is in charge of the film shoot, behind the PLEXIGLAS® viewing dome
© Photo : Christoph Bauer/Evonik Industries AG

The natural enemies of the giant squids are sperm whales, which can dive to depths of up to 3,000 meters and feed predominantly on squids. The gargantuan creatures are thought to engage in epic battles deep below the ocean's surface.

Such whales alerted the researchers to the presence of Architeuthis near the Azores, an archipelago in the North Atlantic which belongs to Portugal.

The Azores, where the gigantic ocean creatures can often be observed directly from the beach, are known as being among the world's largest whale territories.