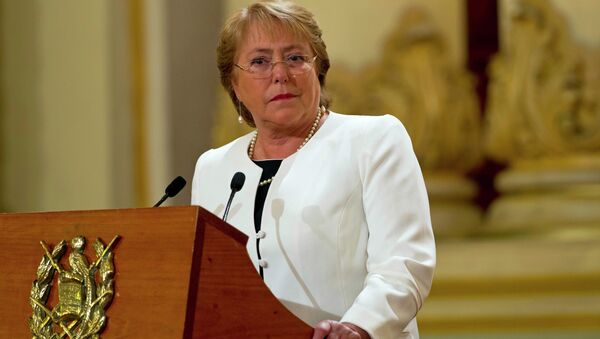 Chile may ease its absolute ban on abortions in a move announced by the country's President Michelle Bachelet.

US Administration Opposes New Republican Bill Restricting Abortion
MOSCOW, February 1 (Sputnik) — Chile's President Michelle Bachelet has submitted a bill to the country's National Congress to loosen a total ban on abortions, which are punishable in the predominantly Roman Catholic country by up to five years in prison, the BBC reports.

Speaking on national television on Saturday, Bachelet said that thousands of Chilean women are annually risking their lives due to the absolute ban of abortion.

"Facts have shown that the absolute criminalization of abortion has not stopped the practice. This is a difficult situation and we must face it as a mature country," Bachelet said.

She reminded viewers that the absolute ban of abortion was introduced in Chile in 1989, under General Augusto Pinochet's rule.

"Chile had an important legal and public health tradition, interrupted arbitrarily in the last days of the dictatorship. Twelve bills [to decriminalize abortion] have been tabled in the Chamber of Deputies and the Senate since 1991," she said.

As for the new bill, it would legalize abortions in at least three types of cases, including conception caused by rape, instances where the fetus is malformed and where the pregnancy poses a threat to the life of the woman carrying the fetus.

According to Bachelet, about 500 women die each year in Chile because of fetal malformation.

Meanwhile, a group of opposition legislators and even some members of the president's New Majority bloc have already said that they will block Bachelet's proposal.