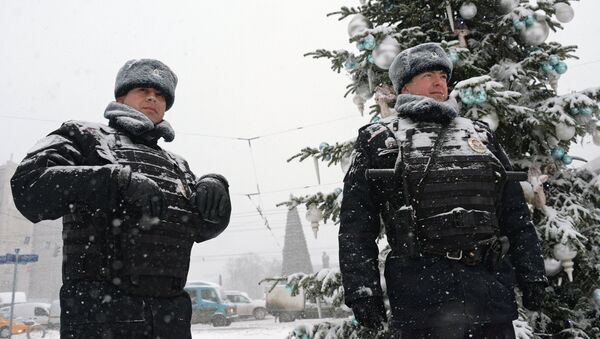 © Sputnik / Artem Zhitenev
/
Go to the photo bank
Subscribe
The Moscow section of the Russian Ministry of Internal Affairs has created a special detachment of police officers to assist visitors in the nation's capital.

The officers, trained in conversational English, with some knowing other languages, have been patroling the center of Moscow since late December, and are meant to alleviate a common problem faced by the city's 5.7 million plus tourists each year in the Russian capital – the lack of the ability to communicate with locals. The initiative will surely also soften the image of the burly Russian police officer.

The officers wear special armbands in English and Russian denoting them as "Tourist Police", with 60 officers patrolling the streets at any one time across 11 locations in the city center, Rossiyskaya Gazeta explains. They are ready to provide directions, or more serious assistance, when called upon by the public.

Moscow Mayor Goes on Traffic Control Tour
Language training, which is continuous, is meant to account for any possible situation the officers may encounter in their work. Additional training for the officers includes courses on local history, along with the fundamentals of speech ethics. The officers are purposely being rotated around the city to improve their sense of directions, and have themselves completed excursions across the city's tourist spots to put them in tourists' shoes.

The police service's initiative is meant to accommodate the ever-growing number of tourists coming to the Russian capital, with 5.7 million tourists visiting the city last year, compared with 5.6 million a year earlier, and 4 million in 2010.

Sergeant Oksana Litvinenko, one of 26 women in the 184 officer force, recently spoke to a reporter from Rossiyskaya Gazeta who had joined officers on patrol for the day. "Visitors had approached us with questions even before we came to work with the [tourist] police," she noted. "As a rule, everyone asks the way to the sights, the working hours of museums or the [Lenin] Mausoleum, asks where they can buy tickets to enter the Kremlin. Some foreigners can speak Russian, but in any case, with a knowledge of English we feel more confident ourselves."

In addition to their work with tourists, the officers also proceed with carrying out their regular work in defending public order. They are often charged with the detention of hooligans, along with outright criminals.

The officers comprise a battalion reporting to the First Operational Regiment of the Moscow City Police. If the experiment proves successful, the country's Ministry of Internal Affairs will consider expanding it to other regions across the country.