Meeting of Contact Group on Ukrainian Reconciliation Kicks Off in Minsk 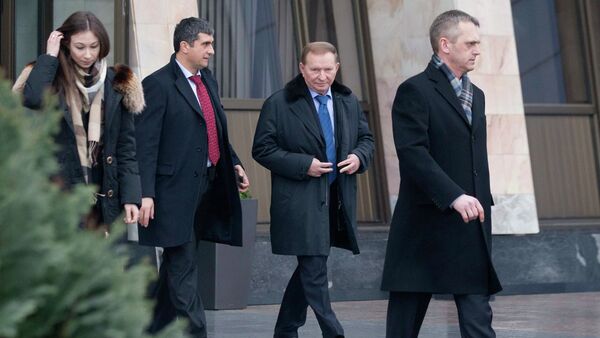 © REUTERS / Vasily Fedosenko
Subscribe
The meeting of the Contact Group on Ukrainian crisis began in Dipservice Hall in the center of Minsk.

Donetsk, Luhansk Ready Only for Mutual Heavy Weaponry Pullback, Ceasefire
MINSK, January 31 (Sputnik) – The meeting of the Contact Group on Ukrainian crisis kicks off on Saturday in Dipservice Hall in the center of Minsk, the capital of Belarus.

Earlier in the day, the envoys of the breakaway Donetsk and Luhansk people's republics Denis Pushilin and Vladislav Deinego, former Ukrainian President Leonid Kuchma, Russian Ambassador in Ukraine Mikhail Zurabov and OSCE envoy to Ukraine Heidi Tagliavini arrived in the city for a fresh round of talks on the Ukrainian reconciliation.

Kiev Ready for Substantive Talks in Minsk, Aims for Specific Results
The Contact Group meeting was scheduled to take place in Minsk on Friday, however, the DPR and LPR envoys left the city in the evening as Ukrainian government representatives did not show up for the talks.

Kiev and independence supporters managed to reach a ceasefire deal during a Contact Group meeting in Minsk last September. However, the confrontation between the warring parties intensified severely in the beginning of 2015, deemed by the UN to be the "worst hostilities" since the truce was signed.

Russian, German and French leaders during a phone talk on Saturday expressed hope that the ongoing Minsk peace talks on Ukrainian reconciliation will focus on a prompt ceasefire and the withdrawal of heavy weaponry from the area of armed conflict, the Kremlin said.

"The leaders discussed the deterioration of the situation in the southeast of Ukraine. In regard with another meeting of the Contact Group in Minsk they expressed hope that an urgent ceasefire and withdrawal of heavy weapons will be the key issues on the agenda," the Kremlin said in a statement.