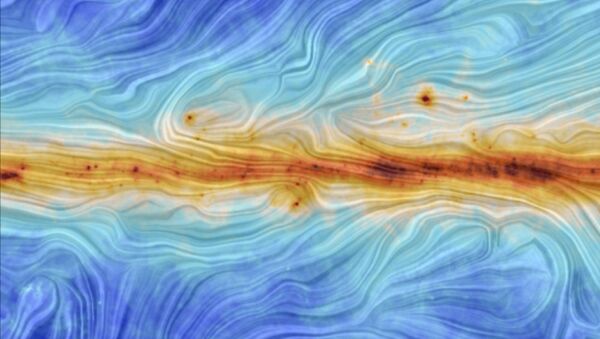 Satellite images taken in March 2014 had been thought to reveal ripples in space-time, a key element in the Big Bang theory; however, it turns out that the pictures merely showed Galactic dust particles.

Russian Scientists Study Cosmic Dust at Unique Open-Air Lab in Antarctic
MOSCOW, January 31 (Sputnik) – An alliance of space scientists have announced that the reported discovery in March last year of evidence of cosmic inflation dating back 13.7 billion years to the beginning of the universe was mistaken, and in fact showed the more mundane effects of interstellar dust from the galaxy.

"Despite earlier reports of a possible detection, a joint analysis of data from ESA's Planck satellite and the ground-based BICEP2 and Keck Array experiments has found no conclusive evidence of primordial gravitational waves," the European Space Agency (ESA) announced in a statement on Friday.

In March 2014 a team of researchers using the BICEP2 telescope in Antarctica announced they had spotted patterns of light in the sky consistent with B-mode polarisation, a curling pattern of twisted light caused by 'inflation', the period that immediately followed the Big Bang.

According to Big Bang theory, the early universe, which began 13.8 billion years ago, cooled from its initial high temperature as it expanded. The heat left over from the Big Bang, which was called Cosmic Microwave Background, is thought to still exist in the universe. The BICEP2 team claimed that it had caused the light patterns they observed over a three-year period.

NASA Plans to Create Revolutionary Space Telescope
However, a new analysis by the BICEP2 scientists, in conjunction with the ESA, has attributed the behaviour of the light to Galactic dust, which also emits polarised light. "The Milky Way is pervaded by a mixture of gas and dust shining at similar frequencies to those of the CMB, and this foreground emission affects the observation of the most ancient cosmic light," read the statement from the researchers. "Very careful analysis is needed to separate the foreground emission from the cosmic background."

The discovery had been hailed as a major advance in cosmology, and potentially one of the greatest of the 21st century. "It’s the smoking gun for inflation," said BICEP2 team leader Clem Pryke of the University of Minnesota last March. However, in May of last year, Scientific American reported that there were growing doubts in the scientific community about the results, which have now been disproved by the latest joint analysis.

Physicists are, however, still optimistic about the chances of finding inflation. "While we haven't found strong evidence of a signal from primordial gravitational waves in the best observations of CMB polarisation that are currently available, this by no means rules out inflation," explained the principal investigator of the LFI instrument on Planck, Reno Mandolesi from the University of Ferrara.

“The gravitational wave signal could still be there, and the search is definitely on,” declared the scientists.