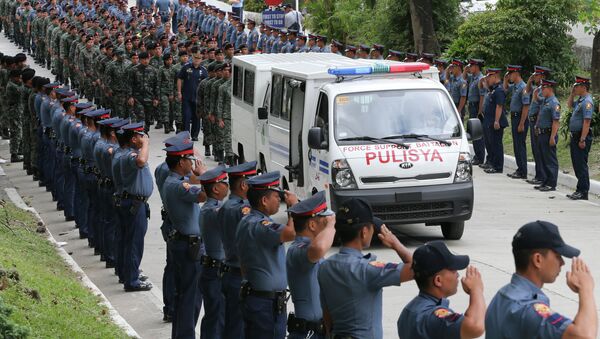 False Terror Arrests Trigger Reinvestigation in Philippines
MOSCOW, January 30 (Sputnik), Ekaterina Blinova — The Philippines is in mourning over the deaths of 44 police officers killed during a special counter-terrorism military operation.

"I want to tell you that I really feel what you feel. I understand each family of our policemen who died in the encounter last Sunday," said the Philippines President Benigno Aquino addressing the families of the deceased, as cited by Euronews.

Is the Moro Islamic Liberation Front Ready to Disarm?
The media outlet notes that Zulkifli bin Hir was apparently shot dead during the fighting, while another bombing suspect, Abdul Basit Usman, allegedly responsible for almost nine bombings in the south, escaped. Officials stated, however, that a DNA test would be carried out in order to confirm Hir's identity.

"I pledge to bring justice to all those who were killed," the President said during the funeral.

"As a president, even if I want to get mad, I cannot allow myself to be driven by emotion. I cannot make careless decisions. If I allow anger to dominate, rather than resolving the problem, we will just worsen it," he added, however, as cited by Al Jazeera.