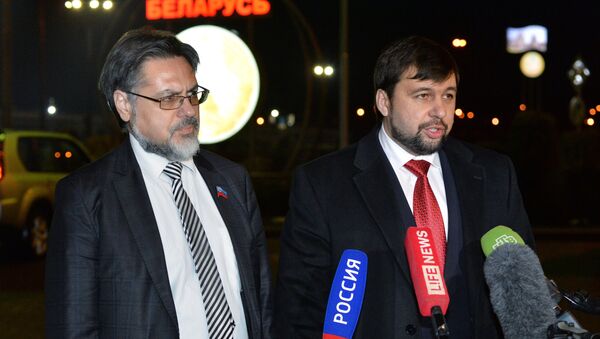 © Sputnik / Viktor Tolochko
/
Go to the mediabank
Subscribe
International
India
Africa
Donetsk and Luhansk People's republics are ready for a ceasefire, but for a mutual ceasefire, according to the joint statement of DPR envoy to the Minsk talks Denis Pushilin and LPR envoy Vladislav Deinego.

Donetsk Self-Defense Forces Ready for Truce Talks With Kiev
MOSCOW, January 30 (Sputnik) – The self-proclaimed republics of Donetsk and Luhansk (DPR and LPR) are ready to announce a ceasefire and pull back heavy weaponry to positions agreed in a reconciliation memorandum if Kiev does the same, the republics' envoys said in a joint statement Friday.

"At the moment, DPR is ready for a ceasefire, but only for a mutual one," DPR envoy to the Minsk talks Denis Pushilin and LPR envoy Vladislav Deinego said in a joint statement.

"DPR is also ready to start the pullback of heavy artillery and multiple-launch systems to positions established by the Minsk memorandum, in accordance with the plan, but only if Ukraine is ready too," the statement reads.

However, if the Kiev government refuses to negotiate and continues to shell the territories of the self-proclaimed republics, Donetsk and Luhansk reserve the right to resume their offensive.

"If the negotiation process fails and shelling of residential areas in DPR and LPR continues, we reserve the right to continue our offensive until the territories of the Donetsk and Luhansk regions are freed," the statement reads.

On Friday, another round of reconciliation talks between Kiev and the independence supporters was scheduled to take place in Minsk, the capital of Belarus, however, the DPR and LPR envoys stated they planned to leave the city in the evening as Ukrainian government representatives did not show up for the talks.

Donetsk, Luhansk Representatives Are Leaving Minsk Talks
Despite a ceasefire agreement being reached by the sides to the Ukrainian conflict in Minsk in September 2014, the confrontation between the warring parties intensified severely in the beginning of 2015, deemed by the UN to be the "worst hostilities" since the truce was signed.

Following a battle between Kiev-led forces and local militia for the Donetsk airport in early January, more than 30 civilians, including children, were killed in the town of Horlivka in the Donetsk Region in a series of airstrikes carried out by Ukrainian warplanes, according to DPR militia.

According to the most recent UN data, more than 5,000 people have died on both sides since the beginning of the military conflict in eastern Ukraine in April 2014.

Donetsk Cultural Centre, Trolleybus Under Shelling: At Least 12 Dead
The heads of the self-proclaimed republics of Donetsk and Luhansk (DPR and LPR) will attend the talks in Minsk if the Kiev government ceases fire and appoints an official envoy to the peace talks, the republics said in a joint statement Friday.

The third precondition is to have a joint statement prepared for signing beforehand, DPR and LPR said.

"With all these preconditions fulfilled, the leaders of the Donetsk and Luhansk peoples republics will definitely arrive to Minsk to take part in high-level negotiations," reads the statement, prepared by DPR and LPR envoys to the peace talks in Minsk.

Kiev, Luhansk, Donetsk Discuss Renewal of Contact Group Talks
A new contact group meeting, comprising envoys from Kiev, the DPR and LPR, Russia and the Organization for Security and Co-operation in Europe (OSCE) was supposed to take place Friday. On the same day, Kiev authorities stated that there was "no sense in holding a meeting," as the DPR and LPR sent their representatives instead of leaders, which violates the format of the group. Luhansk's representative told journalists that Kiev was avoiding negotiations.

Despite ceasefire agreements reached between the warring sides at a Contact Group meeting in Minsk last September, clashes continue in the east of Ukraine. The parties have traded blame for the hostilities, with the situation in the country deteriorating in recent weeks.