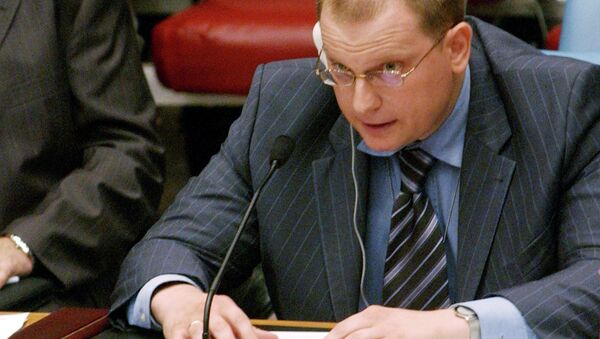 Crew of Russian LifeNews TV Channel to be Deported From Ukraine
MOSCOW, January 30 (Sputnik) — The authorities in Kiev are trying to prevent Russian media from reporting on the grave human rights violations in Ukraine, the Russian Foreign Ministry human rights ombudsman said Friday.

Earlier in the day, the Security Service of Ukraine (SBU) detained LifeNews TV correspondent Yelizaveta Khramtsova and camerawoman Natalya Kalysheva in the Ukrainian capital Kiev. An adviser to the SBU Head, Markiyan Lubkivsky, wrote on his Facebook page that the LifeNews journalists were to be deported from Ukraine and would be denied access to the country for three years.

"The question is about the constant attempts by the Ukrainian authorities using any means to make Russian journalists stop reporting on the real, in fact catastrophic situation in Ukraine regarding the human rights and the rule of law," Konstantin Dolgov said on the Lifenews TV channel.

Dolgov asserted that the Ukrainian authorities are ignoring the demands of the international community to observe human rights. He added that Russia will keep raising the issue of the illegitimate pressure on Russian media, including the blocking of Russian channels, with international organizations and in particular with the Organization for Security and Co-Operation in Europe (OSCE).

Moscow Demands Release of LifeNews Journalists Detained in Ukraine
Friday's detention in Kiev adds to a string of similar incidents when Russian or foreign journalists have been detained or attacked in Ukraine. Most recently, on January 1, LifeNews reporter Zhanna Karpenko and her cameraman were attacked by masked men in Kiev.

According to the November OSCE report on media freedom developments, since the beginning of the Ukrainian conflict 7 journalists have been killed, at least 170 have been attacked and about 80 have been abducted and detained in the region.

The conflict in southeastern Ukraine has claimed the lives of more than 5,000 people since April last year. Fighting in the region has intensified dramatically over the past weeks with multiple instances of deadly shelling killing dozens of civilians in Donetsk, Mariupol and other cities.