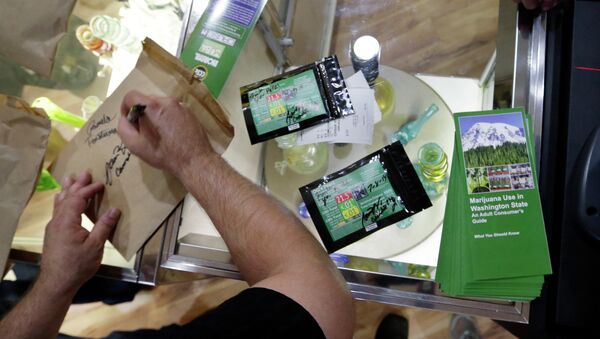 © AP Photo / Elaine Thompson
Subscribe
A Seattle-based marijuana supplier is anticipating a high demand of its “Seahawks Blend” when the Seahawks take on and New England Patriots in Super Bowl XLIX.

Solstice, the medical marijuana company, has introduced a special “12th Pack” promotion, cigarette-style packs of 12 in reference to the Seahawks’ fan base the “12th Man.”

Company employees are working day and night to produce 12,000 joins before the big game on Sunday.

“It's not like I go home with cramps or anything," employee Katy Filippone told NBC Seattle affiliate KING5.

Although Filippone is rolling twice as many joints as her normal pace, she is happy to be part of Seahawks’ promotion.

"I feel like I'm more invested in it now this year. I really want them to win," Filippone laughed.

Solstice’s so-called “12th Pack” sold out within 15 minutes of its original announcement, and is now producing around 2,000 joints per day to keep up with demand.

"And to that we just respond, 'We play within the rules of our state. That's something you should advise your team to do,'" ‎Director of Sales and Marketing at Solstice Joe Santucci said.