The Nuclear Hot Potato: To Keep, Scrap or Upgrade the Trident System? 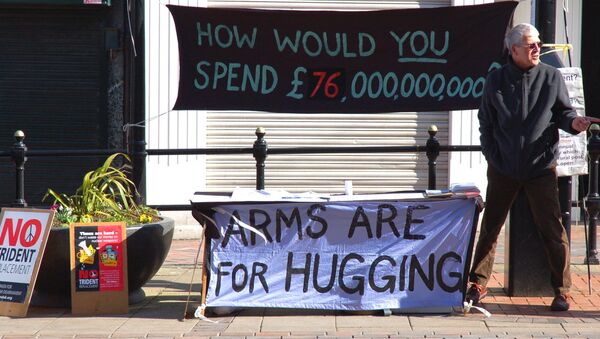 © Flickr / Vertigogen
Subscribe
The issue of replacing the UK’s nuclear defences has been once again grabbed headlines with a heated MPs debate and activist Russell Brand calling for an end to the UK’s Trident system. However, many are asking what the general public thinks about keeping or scrapping Britain’s nuclear defences?

A decision on whether to replace the UK's current nuclear defence system, known as the Trident, is expected to be made in 2016, and while there has been debate over what replacement should be made, there has also been a case put forward to scrap the UK's nuclear weapons and defence systems altogether.

The UK's current nuclear defence system consists of four submarines, armed with nuclear warheads that are docked in Falsane, Scotland.

One submarine is on patrol at all times, as part of a programme of Continuous At Sea Deterrence.

The matter of replacing the Trident programme was debated in the House of Commons last week, with a coalition of Scottish National Party (SNP), Plaid Cymru and Greens MPs tabling a motion to scrap the renewal of the nuclear deterrence system.

Despite this opposition to renewing or replacing the UK's ageing nuclear defences, only 35 MPs voted against further nuclear development, with 364 endorsing an upgrade, and a further 250 MPs, including Labour leader Ed Miliband, abstaining from the vote.

MPs reject calls to scrap the replacement of the UK’s Trident nuclear weapons, by 364 to 35: http://t.co/5JTetX6M4W pic.twitter.com/KnaZY3ho5U

The vote in parliament was non-binding and had no impact on a final decision, with the victorious government from May's general election to decide the fate of the Trident programme.

However critics of proposals to upgrade Trident say that the major politicians aren't listening to people on the street, with Kate Hudson, general secretary for activist group Campaign for Nuclear Disarmament (CND) labelling the decision as "a snapshot of the gulf between Westminster and the British public."

To bulk up defences or to go nuclear free?

Following the parliament vote, a number of protests were held across the UK, with thousands demonstrating outside the UK ministry of Defence (MoD) offices, against plans to replace the Trident nuclear systems, with estimates suggesting it could cost anywhere from £20 billion up to £100 billion.

Opposition groups such as the CND, and political parties like the SNP and the Greens have argued that budget proposals for upgrading a nuclear deterrence system could be better spent on improving health and education services.

Kate Hudson from the CND said that the parliamentary vote showed "just how many MPs have refused to move on from the Cold War and are even prepared to sacrifice the NHS to maintain a nuclear arsenal. If it's security they want, then it's illusory, taking a heavy toll both in the UK, as public services are slashed, and abroad, as states around the world are given the incentive to develop their own nuclear weapons systems."

Comedian-come-political activist Russell Brand also joined the debate, calling for any nuclear replacement program to be scrapped, and for the estimated £2-3 billion annual costs associated with the program to be reverted to the NHS.

However, these claims have been countered by many others, with Labour MP Brian Donohoe arguing that it would be a "crazy notion" not to consider replacing the Trident defence system.

Meanwhile, a report undertaken by Peter Cannon, Strategy and Terrorism Director at think tank — the Henry Jackson Society, strongly recommended the continued implementation of the Trident system, labelling it as the "UK's ultimate insurance policy," which provides a deterrent to an attack on Britain that "no other military capability could match."

Despite these views from political leaders, activist groups, researchers and celebrities, many are asking what the British public think when it comes to replacing or renewing the UK's nuclear defences.

A poll undertaken by activist group WMD Awareness last year found that a majority of people surveyed were in favour of disbanding or reducing the size of the Trident defence system.

Here's an animated reminder of the terrifying humanitarian consequences of #nuclearweapons https://t.co/COYd0Boh4Q pic.twitter.com/GY8RvEtyRC

The poll, which surveyed more than 4,000 adults, including more than 1,000 people between the ages of 18-35, found that 51 per cent of people were in favour of either completely disbanding or reducing the UK's current nuclear defence systems, with only 19 per cent believing the current program should be renewed at its current capacity.

The survey also found that only 6 per cent of people thought the UK government should prioritise defence spending over the next 10 years, with health, the economy and education considered to be far more important issues.

When the results were broken down, the survey found that only 19 per cent of those between the ages of 18-35 supported continuing of the Trident system, suggesting that the issue of defence and nuclear protection was a far less significant issue for younger Britons, which seemingly backs up claims that some MPs may be out of touch with the broader public.

However another poll, undertaken by YouGov found differing results, with a July 2015 survey on the Trident finding that only 20 per cent of respondents were in favour of giving up nuclear weapons all together, while roughly a third of people would prefer to maintain the current system, and another third were in favour of finding a cheaper alternative.

While there seems to be a contrast and uncertainty about the British public's view on whether the UK should maintain its nuclear weapons as a protective shield, what is clearer is that the majority of MPs in Westminster appear to be supportive of continuing the country's nuclear defences in some capacity.

While the Trident issue isn't likely to feature as a key part of the major parties' general election push, any significant support for the SNP and Greens in May's vote could lead to the topic hitting the headlines once again.