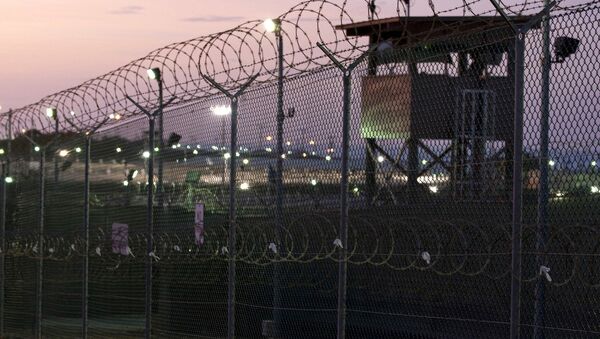 © East News / Tech. Sgt. Michael R. Holzworth
Subscribe
International
India
Africa
The leadership of the the Organization for Security and Co-operation in Europe's (OSCE) Parliamentary Assembly's Committee on Democracy, Human Rights and Humanitarian Questions urge all OSCE countries to help the US government to close the Guantanamo prison.

Guantanamo Bay Naval Base to Remain Open Despite US-Cuba Thaw
MOSCOW, January 29 (Sputnik) — The leadership of the the Organization for Security and Co-operation in Europe's (OSCE) Parliamentary Assembly's Committee on Democracy, Human Rights and Humanitarian Questions has called on European countries to help the United States to close the Guantanamo prison, as soon as possible, according to the OSCE press service.

"While progress has been made in relocating detainees from Guantanamo, much remains to be done. We applaud the commitment of the US government to close the facility, but the United States cannot achieve this alone. It requires the support of all OSCE countries," Committee Chair Isabel Santos (MP, Portugal) and Vice-Chair Mehmet Sevki Kulkuloglu (MP, Turkey) said in a joint statement.

US Admits That Innocent Man Was Tortured in Guantanamo for Five Years
According to the statement, the continued detention of more than 100 inmates at Guantanamo "year after year remains a dark spot on the United States' reputation in the spheres of human rights and rule of law."

The Guantanamo Bay detention facility was opened in 2002 in the wake of the 9/11 terrorist attacks in the United States. Since then, the notorious detention facility has been subject to criticism by human rights advocates, citing inhumane conditions including the use of torture, described by former detainees and detailed in a recent US government "torture report."

Earlier on Thursday, the Human Rights Watch group published a report, which slammed US President Barack Obama's administration for failing to prosecute any of officials responsible for the torture of hundreds of alleged terrorist suspects after the 9/11 bombings.

Methods of interrogation described in the CIA report include waterboarding, mock executions, prolonged sleep deprivation, threat of sexual abuse, threats against family and others.

In 2009, Obama issued an executive order to review the status of all individuals imprisoned at the Guantanamo Bay Naval Base and to shut down the prison. The number of detainees has been cut almost in half since 2009, but the facility is still open, with 122 detainees remaining imprisoned at Guantanamo.