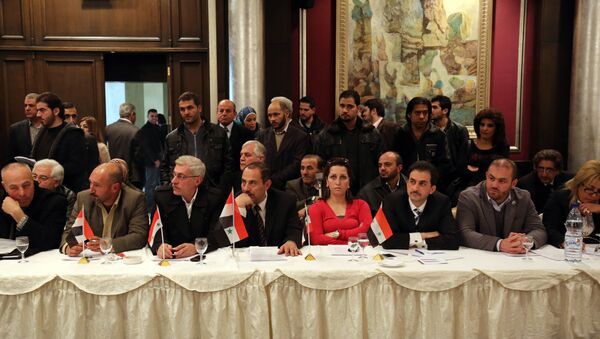 Participants of the intra-Syrian talks in Moscow agreed on the activation and acceleration of delivery of humanitarian aid to all regions of the country, as well as on lifting of economic sanctions imposed against Syrian people.

The main points include the "activation and acceleration of delivery of humanitarian aid to all regions of Syria, without exception on the basis of a relevant UN resolution," as well as "calls on the international community to alleviate and lift economic sanctions imposed against Syrian people," Suheir Sarmini told Sputnik.

According to Sarmini, both sides reached consensus in condemning "acts of aggression by Israel towards Lebanon and Syria, calling on the international community to pressure Jerusalem with the aim of observance of the UN charter and implementation of international resolutions."

Syria’s Domestic, External Opposition Agree on Crisis Settlement Plan
Sarmini stated that it had also been decided to work on holding the next meeting which would take place in a month at the latest.

The intra-Syria talks took place in Moscow on January 26-29. Government officials, representatives of the opposition parties and the UN special envoy for Syria participated in the negotiations.

In June 2012 and January 2014 in Geneva, Switzerland, representatives of the Syrian government, opposition and international mediators gathered to discuss the country's political crisis. However, both rounds of Syrian reconciliation talks failed to put an end to the civil war.

Syria has been embroiled in civil war since 2011. The country's army is fighting several opposition and rebel groups, including the Islamic State. Syria's internal conflict has killed 200,000 people so far, according to UN estimates.