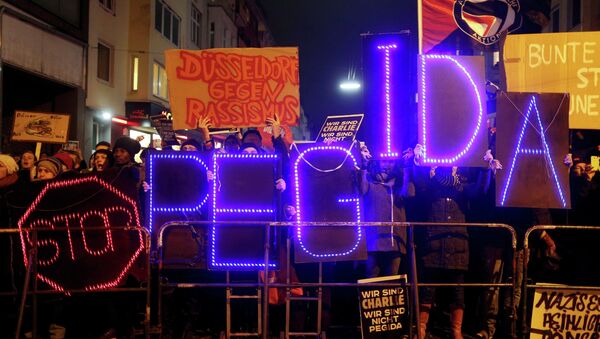 © REUTERS / Ina Fassbender
Subscribe
German anti-Islamization movement Pegida is facing a crisis as its leader resigned after a photograph emerged of him sporting an Adolf Hitler-styled moustache, and the group's recent rallies were canceled or saw fewer participants than they used to.

Germany's Pegida Leader Reportedly Steps Down Amid Hitler Photo Row
MOSCOW, January 29 (Sputnik) — The Dresden-based Patriotic Europeans Against the Islamization of the West (Pegida) movement may be suffering a setback amid the resignations of several high-ranking members and cancellations of anti-Islamization rallies.

Earlier this month, the group's founder, Lutz Bachmann, resigned after a photograph emerged of him sporting an Adolf Hitler-styled moustache and haircut. Media reports also surfaced of Bachmann referring to asylum seekers in welfare offices as "animals" and "scumbags."

Pegida spokeswoman Kathrin Oertel, who took over the group following Bachmann's resignation, stepped down Wednesday due to threats, hostility and media hounding, according to a statement on the movement’s Facebook page.

Pegida Holds First Anti-Islamization Rally After Hitler Photo Embarrassment
"She sacrificed herself for our cause, but when photographers and other strange figures sneak around her house at night, you can't hold it against even the strongest woman for taking a break," the statement said, as quoted by Deutsche Welle.

According to a report by German newspaper Bild, Oertel, the group's deputy leader Rene Jahn and three other members stepped down as they did not want to be associated with "Nazi things and right-wing comments."

Pegida posted a statement Wednesday on Facebook stating that its next rally scheduled for February 2 was canceled due to "organizational and legal reasons."

The group's most recent march, which took place Monday, saw fewer participants than usually, according to the local media.

Pegida Anti-Islamization Movement Spreading to Scandinavia
Since October, Pegida has staged weekly demonstrations in Dresden against what members say is the growing influence of Islam in Europe.

The movement has garnered increased attention in the wake of the Paris attacks on the office of Charlie Hebdo magazine and a kosher market in early January, in which gunmen claiming allegiance to al-Qaeda and the Islamic State jihadist group killed 17 people.

The movement's has spread across Europe, with offshoots holding Monday anti-Islamization rallies in Denmark, Norway, Britain and Switzerland.