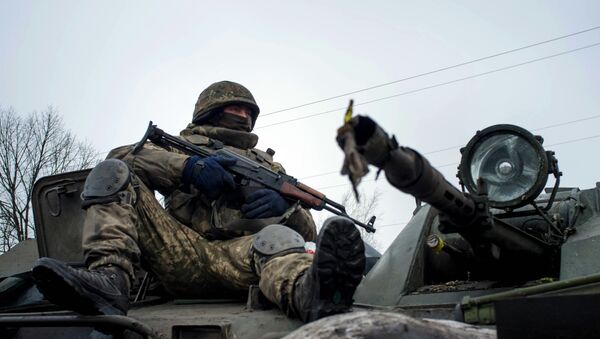 © AFP 2023 / OLEKSANDR STASHEVSKIY
Subscribe
International
India
Africa
Poroshenko wrote on his Instagram page that the salary increase will apply to every Kiev soldier who takes a direct part in hostilities starting from February 1, 2015.

US Vice President Vows More Costs on Russia Over Ukrainian Crisis
KIEV, January 29 (Sputnik) – Ukrainian President Petro Poroshenko has promised an extra 1,000 hryvnias (over $60) a day to every Kiev soldier fighting against independence supporters in the country's southeast amid massive draft evasion.

On Wednesday, Ukrainian presidential advisor Yuriy Biryukov announced that there was mass evasion of a new draft, which started on January 20 amid Kiev's ongoing military action in the southeastern regions of Donetsk and Luhansk.

Fierce fighting between militias and government troops in the region has killed dozens and wounded over a hundred in the past week. At least 30 civilians were killed Saturday in a series of artillery attacks on the port city of Mariupol, with both sides trading blame for the violence.

Kiev authorities have admitted that a major security operation has been launched in the Donetsk area, particularly the Donetsk airport located northwest of the city.