Guantanamo Bay Must Remain US Territory Regardless of Cuban Demands 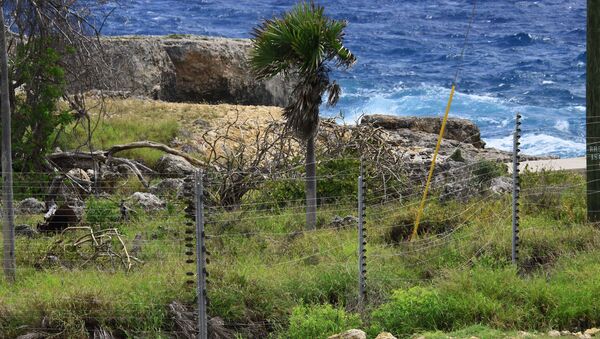 US Republican Ileana Ros-Lehtinen commented on the recent Cuba's claims for Guantanamo Bay, saying that US President must not allow this strategic asset to be extorted from the country.

Raul Castro Urges US to Return Guantanamo Bay for Restoration of Relations
WASHINGTON, January 29 (Sputnik) — US Naval Station Guantanamo Bay is strategically crucial to the United States, and must remain its territory, despite the demands by Cuban leader, Chairman of the Middle East and North Africa Subcommittee, US Republican Ileana Ros-Lehtinen said in the statement.

“Naval Station Guantanamo Bay is strategically important for US national security, and as our own military personnel have said, also plays a key role as a logistical hub in support of a variety of US priority efforts in the region,” Ros-Lehtinen stated on Wednesday. “The President [Obama] must not allow this strategic asset to be extorted from the US by the Castro brothers at any cost.”

US-Cuba Talks Conclude, First Steps Taken on Long Road to Normalization
Cuban President Raul Castro said on Wednesday that the restoration of bilateral relations between the two countries is impossible while the embargo exists and the Cuban territories in Guantanamo Bay have not been returned.

“The Castro brothers, once again, have made their intent toward the United States clear: they plan to use the Iranian playbook in an attempt to extort concessions from the Obama administration in exchange for nothing,” Ros-Lehtinen said.

The congressman noted in her statement that, according to the legally binding agreement between the United States and Cuba regarding Guantanamo, “so long as the United States of America shall not abandon the said naval station of Guantanamo or the two Governments shall not agree to a modification of its present limits, the station shall continue to have the territorial area that it now has.”

US State Dept Describes US-Cuba Discussions as Productive, Collaborative
In December 2014, US President Barack Obama announced that he was intending to normalize relations with Cuba by easing travel and trade restrictions and reopening a US embassy in Havana.

The Guantanamo Bay detention facility was opened within Guantanamo Naval Base in 2002 after 9/11 terror attacks on the United States. Since then, the prison has been repeatedly criticized by human rights advocates, citing inhumane conditions of confinement, including torture.

The United States has been renting a part of southeastern Cuban shore for a naval station in regulation with the Cuban-American Treaty of 1903.