Years of Westminster Weariness Spells Doom for Labour and Tories 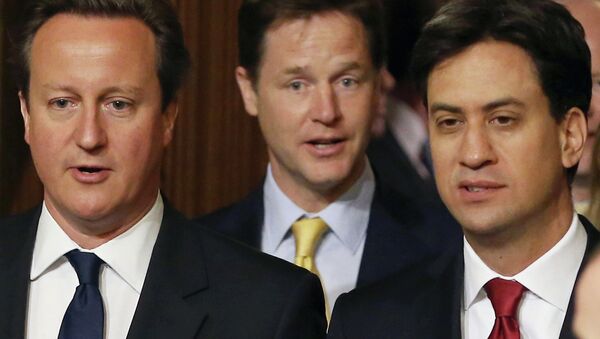 After long periods of Conservative and Labour power since the 1980's, public support and trust in the two-party system in Britain has collapsed and will lead to the closest of battles at this year's May general election.

The 2015 general election in Britain is set to be a tough battle for the two main parties — the Conservatives, under David Cameron and Labour, under Ed Miliband. Both parties held power for more than a decade, yet support for both parties is thinning, as public trust in both is sliding away.

The first polls of this year have seen gains for the minor parties, such as the anti-Europe UKIP and the Greens, as well as the Scottish Nationalists who — despite losing the independence referendum — saw a huge rise in support and who are set to gain seats from Labour in May.

"With this election, it's certainly not going to be one like we've had in the last few years. It's one that‘s both very exciting and very difficult for pollsters such as us."

But how did two long, successive bouts of Conservative, then Labour government lead to such a falling off in trust? A lesson in history is needed…

18 years of Thatcher and Major

Margaret Thatcher had clouted the unions, reformed the public sector, won the battle in the Falklands and survived being blown up by the IRA in Brighton. Finally, after losing her grip, she was ousted in the wake of the bitter poll tax riots. She left a legacy in which capitalism was to the fore and the working man was brow-beaten. She divided many communities — even families — in Britain. 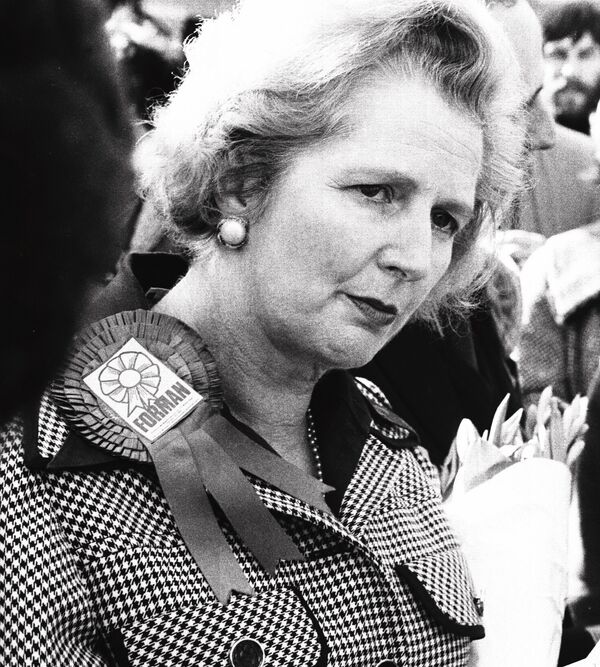 John Major took over and worked on Thatcherism-light before his ‘Victorian' values party descended into a series of murky revelations and allegations of political and sexual sleaze.

Europe divided the Conservatives, so they swept their bitter backroom rows under the carpet. Their economic downfall came on Black Wednesday, when the British Pound had to withdraw from the European Exchange Rate Mechanism and the party lost its reputation for economic competence.

The Tory reign was over. Power remained at the centre of Westminster. The rich were rich and the poor were angry and unrepresented.

Tony Blair's New Labour was swept to power with a staggering 179 seat overall majority in 1997, after 18 years in the wilderness. Shiny Tony promised a National Minimum Wage, devolution for Scotland and Wales and promised greater economic competence than the Tories. With Brown as his chancellor, he beat a deal with the City that would create an independent Bank of England and a ‘light touch' regulator. Labour embraced the bankers.

On the upside, Blair enjoyed a strong economy and was able to do much to expand the role of the public sector. He also managed to broker the Northern Ireland peace agreement. His downfall came with the War on Terror and his "Yo Blair" relationship with George W. Bush. This led to the biggest modern demonstration against war, the dodgy dossiers and the decision to invade Iraq.

Further on the downside, Blair and Brown had a rocky relationship that centred on an agreement that Blair would step down as PM in favour of Brown after an agreed period. He broke that agreement and stayed longer than Brown wanted. Eventually, the Iraq war made Blair toxic and Brown took over, only to see his ‘prudent' and light-touch oversight of the economy collapse in the global banking disaster.

Thirteen years on, Labour left a country still divided and — once again — in the grips of recession. Labour's economic competence was in question, Blair's Iraq gamble with Bush had angered many, and left-wingers felt aggrieved by Blair and Brown's acquiescence to the greedy bankers.

After 31 years of Labour and the Tories, the 2010 outcome was obvious: a large number of people no longer trusted either major party. The 2010 Conservative-LibDem coalition has stumbled along through the expenses scandal, rows over immigration, the NHS, Europe, Afghanistan and many more.

But after five years, neither has assuaged the disaffected. They have swum in the fish tank that is Westminster, peering out of the water only to see a reflection of their own world.

The only hope for many, is to put their vote the way of the minority parties — UKIP, Greens, SNP and Plaid Cymru in Wales and the Northern Irish parties. Adam McDonnell, from pollster YouGov told Sputnik UK:

"It looks likely that we're going to have a hung parliament and that's where UKIP, the Scottish National Parts (SNP) and the Liberal Democrats may be able to hold the reins and may be able to decide who forms the government."

The race to the next UK General Election is heating up between #UKIP's #NigelFarage and Labour's #edmiliband! pic.twitter.com/cqz7Xw2EVy

No serious political commentator is willing to risk their reputation by trying to predict the outcome of May's election. What's certain is that Cameron and Miliband will have to atone for years of their sins. With less than 100 days to go, they have far to walk to erase their parties' past.