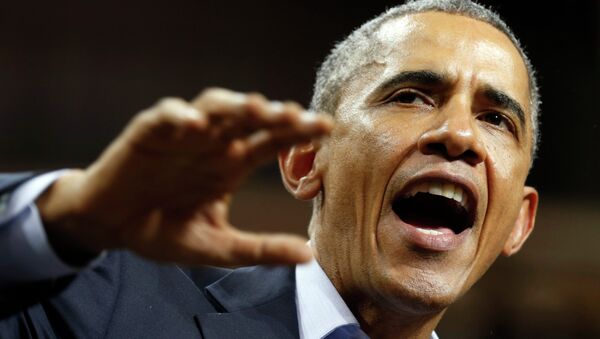 A group of US senators from the Northeast is pushing back on President Obama's proposal to open new areas for oil and gas drilling in the Atlantic Coast regions.

WASHINGTON, January 28 (Sputnik) — A senior member of the Environmental and Public Works Committee US Senator Ben Cardin along with several other US senators expressed opposition to President Barack Obama’s opening of the Atlantic Coast regions for offshore oil drilling, according to the senator’s statement made on Wednesday.

Obama: Keystone Pipeline Will Not Affect US Gas Prices
“As we’ve seen, time and time again, oil spills do not respect state boundaries,” Cardin, a democratic Senator from Maryland said in a statement on Wednesday following a press conference he and other US east coast Senators held on the issue. “We are still trying to clean up after the BP [British Petroleum] oil spill. Everyone from Maryland watermen to small business owners are put at risk by drilling off the Atlantic Coast.”

On Tuesday, the US Department of Interior introduced the Obama administration’s a plan to open up large portions of the Mid- and Southern Atlantic offshore areas to oil and natural gas drilling leases.

As part of the US Oil and Gas Leasing Program for 2017-2022, drilling platforms and pipelines would be built in areas off the shores of Virginia, Georgia and North and South Carolina. Additionally, other potential offshore lease sales would be expanded in areas including the Gulf of Mexico, according to the department’s proposal.

US Allows Atlantic Oil, Gas Drilling Despite Environmental Concerns
Senator Cardin argued that the potential rewards for the state of Maryland were “not worth the risk of more seismic testing, let alone another calamitous spill.”

“At the end of the day, oil is a dirty and finite resource,” Cardin said.

Several other US Senators also opposed the plan following the Obama administration’s announcement on Tuesday. The Senators cautioned the US public against future offshore drilling developments by reminding them about the 2010 BP oil spill, the largest one in history.

“Offshore oil spills don’t respect state boundaries. A spill off the coast of North Carolina could affect Massachusetts. We saw what happened after the BP oil spill," Massachusetts Senator Edward Markey said in a statement on Tuesday.

US Senator for Maryland Barbara Mikulski also stated in a statement on Tuesday that she is “absolutely opposed to the offshore drilling and always will be."

For almost five months in 2010, about 4.9 million of barrels of oil spilled into the Gulf of Mexico as a result of an explosion on the BP-chartered Deepwater Horizon oil rig. Hundreds of square miles of water and seafloor were contaminated, which led to massive wildlife death and habitat destruction along hundreds of miles of the US coast, from Louisiana to Florida.