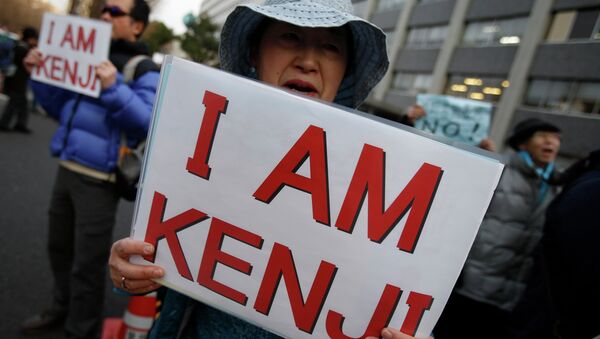 © REUTERS / Yuya Shino
Subscribe
Holding candles, participants in the vigil prayed for the release of the Japanese hostage outside the Japan's prime minister's office in Tokyo, while his fate remains undecided.

Jordan Ready for Prisoner Swap With IS, Fate of Japanese Hostage Unclear
MOSCOW, January 28 (Sputnik) — A demonstration calling for Japanese authorities to enter into negotiations with the Islamic State for the release Kenji Goto, kept hostage by the extremist group in Syria, took place on Wednesday outside the Japanese prime minister's office.

Holding candles, participants in the vigil prayed for the release of Goto, while his fate remains undecided, Kyodo News reported.

Earlier in the day, Japan's Deputy Foreign Minister, Yasuhide Nakayama, said that the situation with the hostage had not changed, adding that the authorities continued to gather and analyze the latest information.

Jordan Buckles Under Pressure From IS, Planning Prisoner Exchange
On January 24, IS released a video depicting Goto holding an image of what appeared to be the beheaded body of another Japanese hostage, Haruna Yukawa. Earlier, IS militants demanded a ransom of $200 million for the release of both Japanese captives.

On Tuesday, a voice in another IS video, claiming to be Kenji Goto, warned that he and Royal Jordanian Air Force pilot Muath Kasaesbeh, also an IS hostage, would be killed within 24 hours if they were not exchanged for a failed Iraqi suicide bomber facing the death sentence in Jordan.