Crossing the Bridge From Eurasia to NATOstan 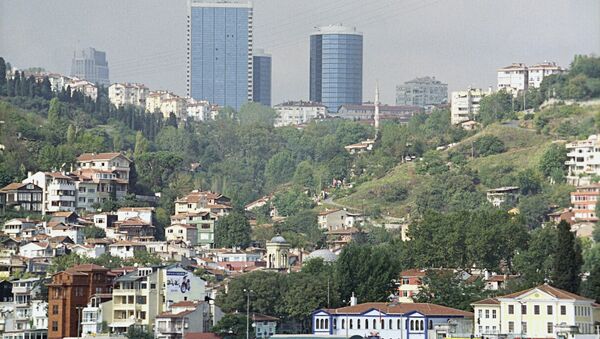 Pepe Escobar
All materials
Seen from Asia, the ghastly crisis in Europe looks and feels like a galaxy away. So as I was back from the Middle Kingdom to the austerity-ravaged, stagnated collection of dysfunctions also known as NATOstan, I decided to stop midway, in the City of Cities, for a moment of reflection.

Turkey Pressures EU with Membership Ultimatum
ISTANBUL, December 31 (Sputnik) — I had no agenda other than to connect the future (the Eurasian Century) with the past (the crumbling European Union dream) via God’s favorite abode, the City of Cities; Constantinople, the New Rome. Just a Eurasia pilgrim on the move, absorbing those flows coming from the Balkans and ancient glorious Thrace; from the Black Sea and the Sea of Marmara through the Bosphorus; and from chaotic, teeming peripheries where gleaming towers coexist with miserable huts.

Morning was a question of being immersed, between myth and history, in the thundering silence of centuries of stony sleep. Istanbul should be read as a scroll – beyond methodological cunning and stylistic ornaments. Jean Cocteau wrote that Constantinople was a city born in purple, a city of blood, sunsets and fires. Casanova wrote that as Constantine arrived by the sea, seduced by the sight of Byzantium, he instantly proclaimed, “This is the seat of the empire of the world.” So, in style, he left the seat of the old empire, Rome, for good.

Take it to the bridge

Turkey's Energy Ministry, Russia's Gazprom to Discuss Gas Price Next Week
Turkey under the AKP party has been busy positioning itself as the ultimate crossroads between East and West. So as I set on my pilgrimage I could not forget how, at the height of the Belle Époque, Germans and Russians were planning a railway from Berlin to Moscow, and that would end on both the Siberian coast of the Pacific and in Beijing. Now Beijing is bound to realize the dream as part of the vast New Silk Road project — an extended Trans-Siberian on high-speed rails running in parallel to a cross-Central Asian high-speed railway whose key hub will be Istanbul.

As I eventually crossed the bridge over the Bosphorus I had seen plenty of Kemalists in crisis, and perhaps a few dissimulated jihadis. The Ottoman empire for over six centuries crystallized the unity of the Sunni Mediterranean and Middle Eastern umma, confronting the Persian Shi’ite empire, inheriting and metabolizing the Byzantine institutional tradition, and keeping a wise balance between faith and ethnicity using the institutions of the community – millet – and respecting the prerogatives of its non-Muslim subjects – dhimmi.

The fragmentation of this plurinational, multicultural empire led to a process of modernization and laicization that fatally engendered a fundamentalist reaction; that’s the basis of the somehow irreversible instability and violence that today characterizes the whole region; something that the Pentagon, with a measure of wishful thinking, characterized as the “arc of instability”.

Everything from the Palestinian tragedy to Iraq, from Persian Gulf Wahhabi plutocrats to the fake Caliphate known as ISIS/ISIL/Daesh, manifests itself as debris of World War I, of the obsession by Western powers to extinguish at any cost the Ottoman experience of imperial, supra-national governance. It’s the “West” that created the “arc of instability” – no less than a century ago.

The glory of Neo-Ottomanism

Erdogan Says Anti-Gov’t ‘Parallel State’ Threatens National Security
This time I did not cross to Asia. Instead, Asia came to me on the European shore, as I met my friend Can Emritan, who lives on the Asian side, at midday in Eminonu. And then he turned into my Virgil, leading me from the best, centenary joint to savor Black Sea fish to the best baklava at Karakoy Gulluoglu; from the best European Istanbul view to passages that evoke Paris; from the Great London Hotel, which Turks call Buyuk Londra, and who sheltered foreign correspondent Ernest Hemingway covering the Greek-Turk war in 1922 to an absolute jewel – a lavish Armenian church hidden in a fish market.

We evoked shades of White Russians in the early 1920s and we retraced the steps of Gurdjieff, the esoteric mystic extraordinaire who was an adept of the dervish fraternity Naqshbandi in Bukhara. No encounters with whirling dervishes though; in 1924 Kemal Ataturk, as part of his secular reforms, hit them hard and they survived only as a “Museum of divan literature,” as in classic Ottoman poetry.

Naturally our key conversation point had to be President Erdogan, whom Emritan calls The Sultan of Kitsch. So many overtones, from Islamo-traditional to Islamo-Ottoman, all drenched in nostalgia for the imperial Golden Age. And ruling above all the AKP party as a monster real estate speculation racket; after all “urbanization drive”, as in China, but Turkish style, means urbanization of the lower middle classes issued from the Anatolian countryside – the political basis of conservative Islam.

Turkish Minister Says Muslim Countries Suffer Most From Terrorism
Erdogan, a fierce critic of the Islamophobia now rampant in the West, is warning of a "clash of civilizations" after the Charlie Hebdo killings in Paris. He has a point, as the notion itself was penned by an ethnocentric, xenophobic and racist former US National Security Council member, Samuel Huntington – and given multiple free rides after 9/11; when in doubt, blame Islam.

My pilgrimage started in Hagia Sophia before sunrise, and ended at night in Taksim square – now an unfriendly cement square, adverse to any possible replay of an Occupy Istanbul. In 1934, Kemal wanted Hagia Sophia turned into a museum to honor the glorious Byzantine and Ottoman traditions. Hagia Sophia will revert to being a mosque, as soon as the Studion monastery, which was itself a mosque from 1453 to 1920, is restored.

This could be yet another manifestation of the neo-Islamic wave; or a graphic case of what Zygmunt Bauman called “religionization of politics” – secular politics reshaped by religious certitude.

Whatever the case, the Sultan should prevail, and get his wish. He already turned NATO upside down – spurning an alliance created to fight the USSR, and kept running against Russia, by clinching the vast Turk Stream pipeline deal with Moscow. And now Sberbank is willing to finance it – alongside Istanbul’s third airport and a nuclear power plant in Akkuyu.

Turk Stream has graphically demonstrated how Turkey is well on its way to become the ultimate crossroads between Eurasia and NATOstan — on its own terms. And the City of Cities is bound to remain — what else — the jewel in the neo-Ottoman crown.

000000
Popular comments
in Turkey I want to visit only Istambul