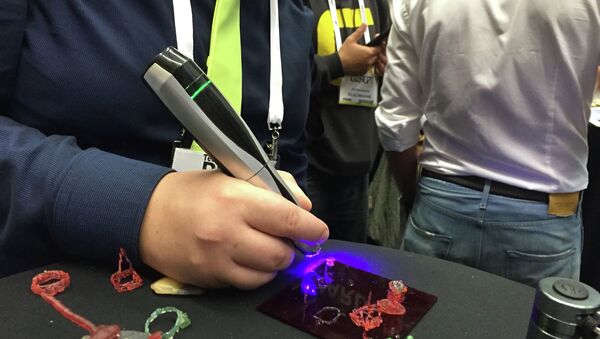 CreoPop cool ink 3D printing pen allows the creator to design by hand various objects including action figures or sculptures. In contrast to other 3D pens, it has no hot parts, no melting plastic and no unpleasant smell.

The article initially contained the wrong name of the company which designed the device. The correct name of the project is CreoPop. We present apologies to the company and to our readers.

MOSCOW, January 28 (Sputnik) — The production of the world’s first 3D printing pen with cool ink which was designed by CreoPop from Russia’s Tomsk, has begun in China, the company reports.

"3D printing pens have been produced in China since December 2014. They are set to go on sale in April 2015," the statement says.

Yota Devices Company Introduces Yotaphone 2, Available in Stores This Week
Unlike normal 3D printers, a 3D pen is a small and relatively affordable device which allows the creator to design by hand various objects including action figures or sculptures. Usually, it utilizes plastic thread that is melted and then cooled while moving through the pen, which can be used to make 3D objects at the press of a button.

In contrast to other 3D pens, CreoPop has no hot parts, no melting plastic and no unpleasant smell. Also, it is safe for children. The company also provides a large selection of cool inks, including different colors, magnetic ink and even body paint ink. The pen is battery-powered.

The inks will be produced in Tomsk.

The project attracted $892,000 from an investing pool headed by the 500 Startups fund. Some more investments are coming.

Earlier the company announced that its product garnered attention in the US, Europe and Asia.