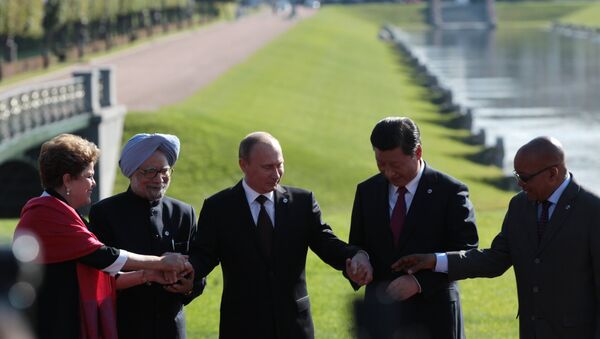 © Sputnik
/
Go to the mediabank
Subscribe
International
India
Africa
The Brazilian Ambassador to Russia underscores that the New Development Bank agreement will come into force only when all BRICS countries ratify it.

"I hope [the Fortaleza agreement] would be ratified by all parliaments because it is important to make all financial implications operational," Guerreiro said in an exclusive interview with RIA Novosti.

The ambassador reiterated that the agreement is not yet legally in force and the timeline for its approval by member-states' parliaments has not been determined.

"The agreement that we reached in Fortaleza is that the headquarters of the Bank will be in Shanghai and that India will propose a person to be the first president of the New Development Bank. While other countries should submit their proposals for persons to be considered as vice-presidents," Guerreiro said.

BRICS Agree to Designate Chiefs of New Development Bank Before Next Summit
An expert contact group from the BRICS countries will meet in March to discuss the creation of an independent rating agency within the group, José Vallim Guerreiro added.

“There was a proposal already presented in this contact group in order to have a BRICS rating agency. The issue will be discussed further in the meeting of the contact group which will take place in March,” he said.

A junk rating indicated that a country or a company is expected to default on its debt.

“This is my personal view, I don’t see anything against the present rating agencies, they have a job to do and there is a demand for their services, no doubt of that. But maybe the BRICS countries could discuss some kind of a different approach. Discussions are ongoing and let’s see what will happen in the future,” Guerreiro said.

In 2013, Chinese rating agency Dagong, Russia’s RusRating and US rating company Egan-Jones established the Universal Credit Rating Group (UCRG). Currently the parties have equal shares in the project, but new partners may join in the future. The first UCRG ratings are expected later this year and its goal is to become an alternative to the "Big Three" rating agencies, namely S&P, Moody’s and Fitch.

Russia Assumes Presidency of Emerging Economies Union BRICS
BRICS is a group of emerging economies that include Brazil, Russia, India, China, and South Africa. The BRICS countries make up about one-third of the world's population and command economies of about $13.6 trillion in total.

The BRICS development bank's Shanghai headquarters and Indian presidency was settled on July 16, 2014, in the northeast Brazilian city of Fortaleza. The bank's initial capital is expected to be $100 billion and its creation is expected to offset the influence of Western-dominated financial institutions.