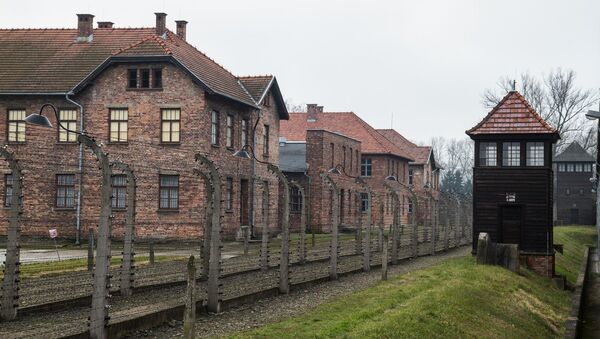 #NeverForget: Survivors Mark Auschwitz Liberation Anniversary
WASHINGTON, January 28 (Sputnik) — Several US lawmakers have introduced a resolution, recognizing the anniversary of the Soviet army’s liberation of the Auschwitz, according to the joint statement released on Tuesday.

“More than 1.1 million men, women, and children, the vast majority of them Jewish, perished within the walls of the Auschwitz death camps before it was liberated by Soviet troops 70 years ago today,” the release read. “We offer this resolution today out of our shared responsibility to ensure the world knows what evil is possible when hatred and intolerance go unchecked and basic human dignity is denied.”

US Republican Ted Deutch announced the introduction of a bipartisan congressional resolution with lawmakers Chris Smith, Eliot Engel Nita, Lowey Ileana Ros-Lehtinen, Steve Israel, and Peter Roskam. The statement noted that millions of people around the world remember those who lost their lives in the Holocaust through the United Nations’ designation of January 27 as International Day of Commemoration.

World
Auschwitz Memorial Event to Be Attended by Last Survivors of Death Camp
“In light of the recent anti-Semitic attacks around the world, most recently in France, it is important that on International Holocaust Remembrance Day we memorialize those lost by standing united against anti-Semitism and all forms of bigotry and prejudice,” the statement concluded.

Last week, Polish Foreign Minister Grzegorz Schetyna, speaking on national radio, claimed that the Auschwitz-Birkenau concentration camp was liberated by Ukrainians since the operation was carried out by the First Ukrainian Front. The comments caused outrage among Russian leadership.

Earlier in January, Ukrainian Prime Minister Arseniy Yatsenyuk remarked on the «Soviet invasion [of] Ukraine and Germany» in a visit to Berlin.

Russian President Vladimir Putin said on Monday that any attempts to revise Russia’s contribution to the victory in the fight against Nazism during World War II should be viewed as glorification of Nazi crimes.

In December 2014, Ukraine voted against the UN General Assembly resolution on fighting the glorification of Nazism.

Moscow has repeatedly emphasized the widespread outbursts of neo-Nazism and aggressive nationalism in Ukraine. Russia has also drawn attention to the active involvement of far-right groups in the February coup in Kiev and questions the new Ukrainian government’s military assault on the predominantly Russian-speaking southeast of Ukraine two months later.

On January 27, 1945, Soviet troops, under the command of Marshal Ivan Konev, entered southwest Poland, liberating 7,600 prisoners from Auschwitz-Birkenau. The Nazi camp, which has become the biggest and most notable symbol of the Holocaust, now houses the Auschwitz-Birkenau State Museum.

Though the exact number of Auschwitz victims will never be known since many documents were destroyed by Nazi forces, an estimated 1.5 million to 4 million people perished at the concentration camp.