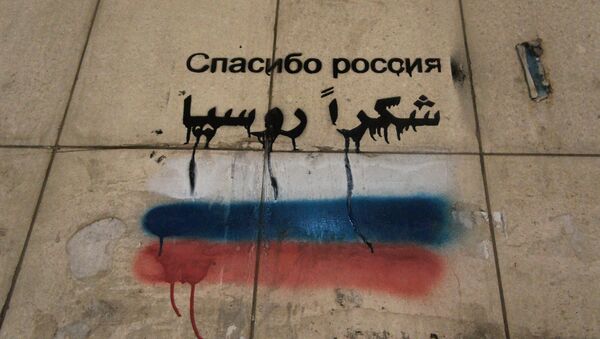 Syrian sheikh Mahmoud Ahmad Ben Ourouj has praised Russia's role in keeping the balance between the East and the West; he has also stated that Russia plays a truly important role in finding and reaching a fair solution to the Syrian crisis during negotiations.

Syrian Stability Depends on US-Russia Engagement in Middle East
MOSCOW, January 27 (Sputnik) — Syrian sheikh Mahmoud Ahmad Ben Ourouj, who is taking part in the Syrian talks in Moscow, has praised Russia’s role in maintaining the balance between the East and the West in an interview to Sputnik.

"Russia always maintains a balance between the East and the West. We always rely on [Russia]," Ourouj said.

He expressed hope that Russia would continue to play a truly important role in the negotiations and relied on the country's assistance.

"It will not be an exaggeration to say that Russia is our only hope," Ourouj said.

US Secretary of State Supports Russian Efforts at Syrian Reconciliation
Four-day talks aimed at reaching a resolution to the Syrian crisis kicked off in Moscow on Monday. The talks are expected to last until January 29 and to see the participation of Syrian government officials, representatives from internal opposition parties and UN Special Envoy for Syria Staffan de Mistura.

The January 26-27 stage of the talks envisages meetings between opposition groups, while the January 28-29 stage will be used to hold negotiations between the Syrian opposition and a government delegation.

On Monday, Syrian President Bashar Assad said that the Moscow talks should be treated as preparation for the conference to settle the Syrian conflict.