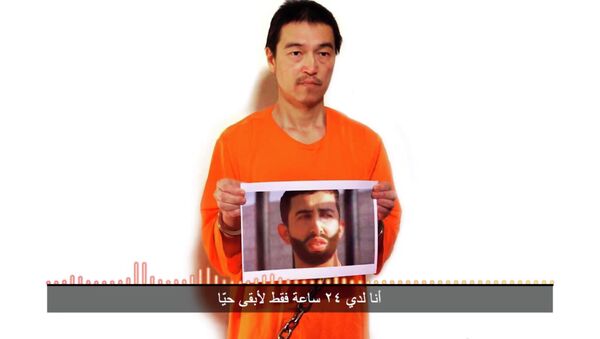 The Islamic State released audio message threatening to kill a second Japanese hostage and a Jordanian pilot within 24 hours if demands are not met.

Islamic State Reportedly Executes One Japanese Hostage as Deadline Passes
A video released entitled 'the second public message of Kenji Goto to his family and the government of Japan' features a still of the freelance journalist with an audio of a man speaking, who claims to be Mr Goto.

He says the group will kill him and Jordanian Air Force pilot Muath al-Kasaesbeh, if a prisoner swap for a female militant being detained in Jordan does not happen within the next 24 hours.

"Her for me, a straight exchange. Any more delays by the Jordanian government will mean they are responsible for the death of the pilot which will then be followed by mine. I only have 24 hours left to live, and the pilot has even less," Goto says, reports DPA.

Mother of Japanese Hostage Pleads IS to Spare Her Son's Life
The German press agency DPA could not confirm the authenticity of the recording, which was distributed by Islamic State of Iraq and al-Sham (ISIS) supporters on social media.

Japan's Kyodo news agency reported on Tuesday that Jordanian authorities were considering releasing al-Rishawi in exchange for Goto and the pilot Muath al-Kasaesbeh.

On Sunday, Islamic State took responsibility in an internet radio broadcast for the beheading of Haruna Yukawa, one of the two Japanese captives.