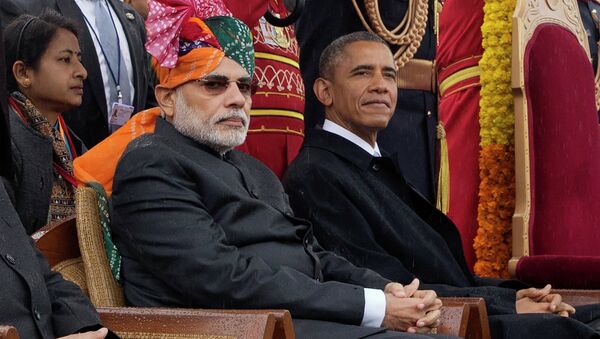 President Obama's attempt to deepen ties with India, China's and Russia's strategic partner, puts New Delhi in a tight situation. India has to balance between newly established relations with the US and its commitment to cooperation with China and Russia.

Obama Announces $4 Billion in Trade, Investment With India
WASHINGTON, January 27 (Sputnik) — India is committed to its relationship with Russia and China amid US President Barack Obama’s newly established bilateral relationship with New Delhi, although the new partnership will likely cause concern from Moscow and Beijing, experts told Sputnik.

On Sunday, President Obama began his two-day visit to India to participate in the country’s celebrations of the Republic Day and take part in a series of meetings with officials to discuss cooperation in defense, economy, civil nuclear power and climate change.

India, China and Russia have long cooperated together in many areas including the establishment of the five emerging economies which also include Brazil and South Africa (BRICS). New Delhi has additionally cooperated with Russia in the areas of energy and defense, and has heavily traded with China.

While in India, President Obama agreed on a number of issues with India including climate change and energy cooperation, a move that Kugelman says will likely concern Moscow.

Indian Army Brandishes Russian Weapons During Republic Day Parade
“I think the US is trying to send a very strong message to Russia in having this summit with [Indian Prime Minister Narendra] Modi given that India and Russia have long been pretty close,” Kugelman said. “I think Russia is very keen to deepen an already flourishing energy based relationship with India.”

Kugelman added that it is “unclear” how India will react in terms of how it “leads its relations with Russia.”

However, Distinguished Fellow at the Atlantic Council Shuja Nawaz told Sputnik that although Russia and India have long established defense relations, Moscow may want to reestablish a relationship with the country amid New Delhi’s new partnership with the United States.

“I think the Indian-Russian ties are historical and pretty long lasting and well established, particularly in the defense area, on the trade side too,” Nawaz, who is also the founding Director of Washington based think tank South Asia Center said.

Nawaz said that since India is now a “global player” and becoming a partner of the United States, a country that continues to have deteriorating relations with Moscow, Russia may being to have “its own separate relationship with India.”

The experts said that China is also likely to express concern in the new bilateral relationship between India and the United States.

India, US Reach Breakthrough on Nuclear Deal Following Obama Visit
“The Chinese could be extremely concerned about India and the United States moving closer together,” Senior Program Associate for South and Southeast Asia at Woodrow Wilson International Center for Scholars Michael Kugelman said. “But given that [Prime Minister] Modi has been so explicit in his support for China… I think that China knows that India would not want to do anything that would been seen as provocative toward China.”

Nawaz told Sputnik that despite strong trade ties between China and India, Beijing “will be watching carefully,” when it comes to an increased economic relationship with New Delhi and Washington.

“The Chinese have their own longer term vision of trade ties, they continue to be concerned,” Nawaz said.

Kerry: US, India to Deepen Partnership in Battling Terrorism
President Obama’s trip to India was his second trip to New Delhi since his first visit in 2010, and also the first time an incumbent US president made a second visit to the country.

US Secretary of State John Kerry also visited India earlier in January and said that the two countries would strengthen their partnership by combating terrorism, deepening dialogue on key political and security issues, and boost sustainable economic development and growth in both countries.

During this week’s visit, President Obama agreed on a number of deals with New Delhi including striking a breakthrough nuclear agreement which gives India greater access to civilian nuclear technology in addition to $4 billion in trade and investment over the next two years.