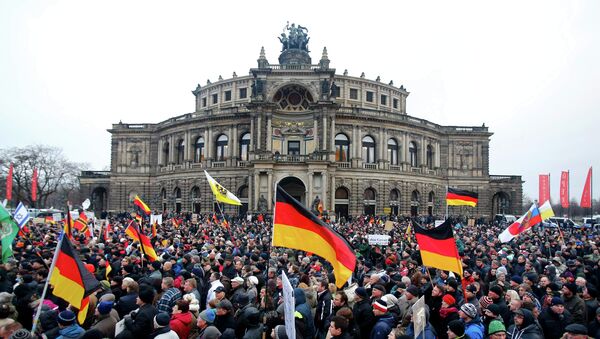 © REUTERS / Hannibal Hanschke
Subscribe
Pegida held its first rally since the movement’s leader Lutz Bachmann stepped down after photos of him posing as Adolf Hitler and a member of Ku Klux Klan emerged.

MOSCOW, January 26 (Sputnik) – The German movement against the alleged Islamization of the West (Pegida) held the first rally in its hometown of Dresden after the group’s leader stepped down following a major scandal, Reuters reported.

"Islamists and religious fanatics should be expelled and not allowed to re-enter," said Kathrin Oertel, Pegida’s cofounder, during the rally held on Sunday, as quoted by the news agency. Those present carried signs saying "They don’t do anything, they move here and they deal", "For a sovereign country" and "Thank you Pegida", AFP reported.

Dresden police estimated that the rally attracted as many as 17,000 people, far less than the record 25,000 crowds the movement drew on January 12. Pegida holds weekly anti-Islam and anti-immigration demonstrations in the city. However, it was forced to cancel a similar event last week following death threats from the Islamic State.

The second blow to Pegida came on Wednesday, when German media published photos of the movement’s leader Lutz Bachmann posing as Adolf Hitler and a member of Ku Klux Klan. Reports also emerged that Bachmann referred to immigrants as "cattle", "scumbags" and "trash" in a private conversation, according to the Guardian.

Germany's Pegida Leader Reportedly Steps Down Amid Hitler Photo Row
German officials decried the movement. On Sunday, Reuters quoted Foreign Minister Frank-Walter Steinmeier as saying that "in Germany the damage that Pegida’s xenophobic and racist slogans and posters have already done is underestimated."

Earlier in January, German Chancellor Angela Merkel along with top officials and politicians took part in an anti-Pegida rally held in Berlin.

An anti-Pegida rally in Dresden was also held on Sunday, attracting as many as 5,00 people, according to Reuters. Earlier in January, approximately 100,000 people joined demonstrations against the group held in cities across Germany.