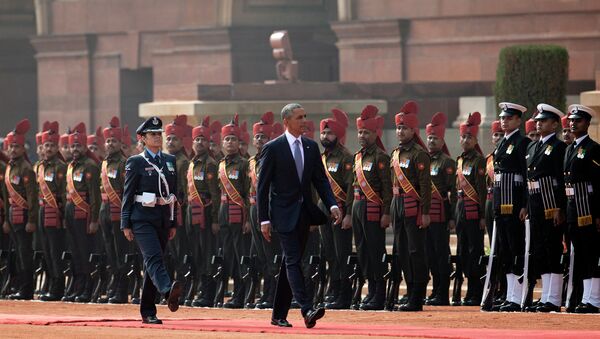 The chief guest at the event, US President Barack Obama, who arrived in India for a three-day visit on Sunday, had a front-row seat at a display of India's military hardware, primarily of Russian design and manufacture.

Among the jointly made Russia-India products on display at the Republic Day parade are BrahMos, one of the world's fastest short-range supersonic cruise missiles, capable of flying at speeds up to Mach 3; and the Sukhoi Su-30MKI (Flanker-H) fighter jet developed by the Sukhoi Design Bureau and built by Hindustan Aeronautics Limited.

Russia Ready to Supply India With Anaerobic Submarines
On the naval front, the Russian-made carrier-based Mikoyan MIG-29K multirole fighters and India's newest warship, the INS Kolkata, were also on display at the Republic Day ceremony.

India is Russia's largest importer of military equipment, with $4.8-billion worth of weapons and hardware supplied in 2013.

January 26, 1950 marks the day when the Constitution of independent India came into force. Every year, India invites a chief guest for the event. Obama is the first US president to serve as guest of honor.