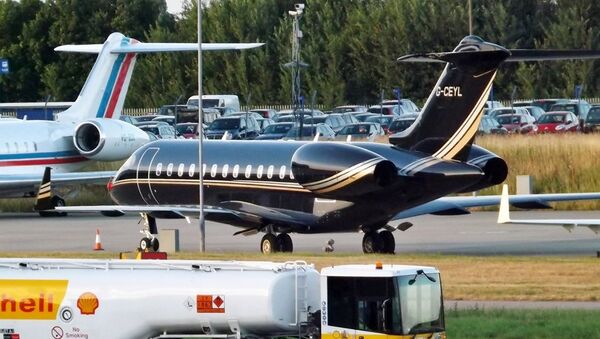 © Flickr / markyharky
Subscribe
The plane belongs to Richard Caring, a man who donated almost $3 million to Blair’s party during the 2005 elections.

Letter Reveals Tony Blair Complicit in Crackdown on Gaddafi's Enemies
MOSCOW, January 25 (Sputnik) — The luxurious private jet used by the former British Prime Minister Tony Blair is apparently owned by one of the UK’s richest men, according to the Telegraph.

The Bombardier Global Express, dubbed “Blair Force One”, belongs to Richard Caring, a Labor party donor whose net worth is estimated at about $1.2 billion. Caring, who made his fortune in fashion, property and restaurants, donated almost $3 million to Blair’s party during the 2005 elections, the newspaper adds.

The plane, built in 2006, is outfitted with a stateroom, lounge, kitchen and bed, the Daily Mail adds. The aircraft is operated and managed by the International Jet Club,  and according to an expert cited by the newspaper, a month-long lease of a Global Express-class aircraft usually costs about $1.2 million.

The Daily Mail noted that Blair currently works in consultancy roles, visiting countries such as Mongolia, Kazakhstan and Rwanda. He was also seen disembarking from it in 2013 in Bangkok, Sardinia and New York.