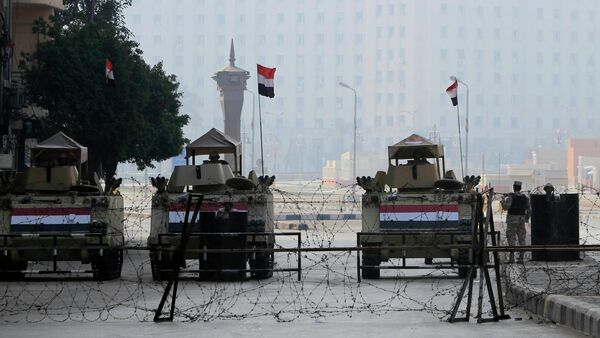 MOSCOW, January 25 (Sputnik) —At least 15 people were killed in Egypt's Cairo and Alexandria on Sunday, Reuters has reported, as supporters and opponents of President Abdel Fattah al-Sisi clashed on the third anniversary of the 2011 protests which toppled former President Hosni Mubarak.

According to AFP, the protests were led by Islamist groups against the government, which came to power after then-General al-Sisi overthrew Islamist President Mohamed Morsi.

At least two of the deaths came after an explosive device being planted under a high-voltage tower exploded prematurely, police told AP.

Violence Flares in Cairo During Third Anniversary of Egyptian Arab Spring
Tahrir Square, the site of the 2011 protests, was closed off by police to contain violence, as gunfire and sirens were heard throughout downtown Cairo, according to Reuters.

Earlier in the day, two policemen were wounded after an improvised explosive device detonated outside a sports club in the Heliopolis area of Cairo, Egyptian security sources said on Sunday, according to Reuters.

Pipe Bomb Explodes Near Presidential Palace in Cairo, Several Injured
The blast came as Egyptian security forces used tear gas to disperse small protests in Cairo on the anniversary of the popular uprising that ousted President Hosni Mubarak in 2011.

In a separate development on Saturday, a female protester was fatally shot in central Cairo near Tahrir Square, the symbolic heart of the 2011 uprising that put an end to Mubarak's 30-year rule.

Shaimaa al-Sabbagh, of the Socialist Popular Alliance Party, was reportedly killed as police were dispersing a protest in downtown Cairo.

On Friday, a 17-year-old girl was killed during protests in Egypt's second most populous city, Alexandria. The outlawed Muslim Brotherhood blamed security forces.

Egyptian Judge Orders Release of Mubarak Sons Pending Retrial
Police have repeatedly clamped down on the Islamist party's members since the army toppled Mubarak's successor Mohammad Morsi in 2013 after a year in power.

Hundreds of Morsi supporters have been jailed since then. The former president currently stands trial; he is charged with crimes including espionage and involvement in terror attacks.